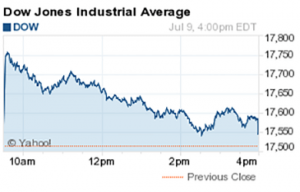 The DJIA today gained 33 points today despite climbing as much as 250 points early in the trading day. This was as the markets continue their wild swings thanks to ongoing drama in Greece, China, and the United States. The markets recovered from yesterday's three-hour blackout caused by the rollout of "a software release in preparation for the July 11 industry test of the upcoming SIP timestamp requirement." Shares of Nasdaq OMX Group Inc. (Nasdaq: NDAQ) jumped 1.8% today after its rival Intercontinental Exchange Inc. (NYSE: ICE) suffered the embarrassing closure of the New York Stock Exchange.