What is a currency war?

Currency wars are also referred to as "competitive devaluations." They occur when a number of nations seek to deliberately depreciate the value of their domestic currencies. The goal is to stimulate their respective economies.

You see, a weaker currency will make a nation's exports more competitive in global markets and simultaneously makes imports more expensive. Higher export volumes increase economic growth, while more expensive imports encourage consumers to shift to local alternatives instead of imported products.
While currency devaluation is a common occurrence in the foreign exchange market, the hallmark of a currency war is that a number of nations engage in devaluation attempts simultaneously.

Presently, more than 20 countries have reduced interest rates or implemented measures to ease monetary policy from January to April 2015. And in August, China - the world's second-largest economy - jumped on board in a major way, placing a strain on the world reserve currency, the U.S. dollar...

China fired a shot heard 'round the world Aug. 11, stoking fears of what could become the ugliest of all currency wars. In a surprise move, the country massively devalued the yuan 2% - its biggest one-day devaluation in 20 years.

Chinese officials were quick to play down the devaluation. Ma Jun, the chief economist at the People's Bank of China, said the Chinese government had "no intention or need to participate in a currency war."

But, as is often the case, actions speak louder than words.

"China is no longer an average player in the global economy. They're the second-largest economy in the world. And when you have the devaluation of 2% right off the bat automatically - you're going to have a higher cost burden on the exports from the United States to Asia, and to one of our largest export markets, to say nothing of the impact it's going to have on the region," Jon Huntsman, former U.S. ambassador to China, told CNN on Aug. 16. "So when you look at the immediate import that it had on currencies - you get a sense as to why people are very, very frustrated with China."

China's move will have more than just that immediate impact - it gives the country unprecedented, long-term control over the U.S. dollar...

Peter Schiff, CEO of Euro Pacific Capital and best-selling author of "Crash Proof," issued a warning about currency wars and an impending U.S. dollar collapse. He spoke to Newsmax TV on Aug. 11:

"We're on the verge of a much worse financial crisis than the one we went through in 2008, and it's going to take the form of a currency crisis. You're talking about currency wars. America is going to win the currency war, which is a race to the bottom, and you don't want to win a currency war because a currency war is different from most wars in that the object is to kill yourself and unfortunately, we're going to succeed."

You see, no other country has had this much impact on the U.S. monetary policy in quite some time - or arguably, ever. The U.S. Federal Reserve must now reconsider the dollar's role in foreign exchange markets as it decides whether to raise interest rates this year.

"It is very possible that we could see a 10% to 15% drop in the exchange rate against the U.S. dollar in the next week or two," Duncan Innes-Ker, of the Economist Intelligence Unit, told The Guardian on Aug. 13. 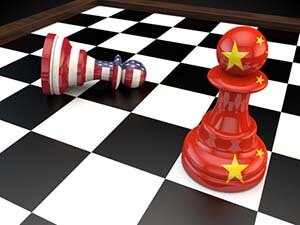 In an Aug. 13 report, Morgan Stanley analysts Hans Redeker, Ian Stannard, and Sheena Shah said China has exported "deflationary pressure" for global central banks to depress their countries' own exchange rates. "This is not a marginal event, given China's economic weight."

The Fed was expected to raise rates as early as next month. It has said it wants to be "reasonably confident" inflation is returning to its 2% target before enacting a rate change.

But a weaker yuan would reduce the price of Chinese goods. That, in turn, would depress the already low U.S. inflation rate of 1.3%.

Currency wars are only one of the ways China aims to take down the U.S. dollar... In fact, there are five dangerous catalysts that could destroy the dollar and trigger a massive U.S. economic collapse. Continue here to find out how these five "flashpoints" will trigger the U.S. dollar demise...

This "currency war" looks more like a prelude to an actual war…World War III? No clue, but China seems to be prepared for that too. I hope that I am being paranoid but all wars are about power which is political/economic…