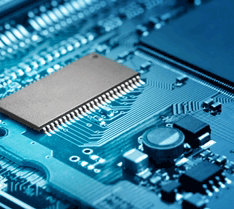 Now, Money Morning Defense & Tech Specialist Michael A. Robinson has found the best technology ETF on the market to profit from this massive M&A wave.

When analyzing this year's 276 M&A deals, Robinson honed in on one particular industry: semiconductors.

"What's going on is so profound that I believe that, for the semiconductor industry at least, 2015 will go down as 'Year of the Mega-Merger,'" Robinson said.

Some of the biggest deals we've seen in 2015 include:

Robinson says one of the biggest reasons for 2015's M&A mania is the cost of producing a new semiconductor line has climbed 230% from $30 million in 2005 to $100 million today. He also says established companies can use mergers to breaking into growth markets like cloud computing and the Internet of Everything.

"The result is that chipmakers are merging so they can take advantage of new growth opportunities and the higher profit margins that accrue with more output at lower overhead," Robinson said.

And the best technology ETF to play this M&A trend is up 8% this year, with more gains ahead…