For Dec. 31, 2015, here's the top stock market news and stocks to watch based on today's market moves…

Here's how the major indexes were performing as of 2:40 p.m. today… 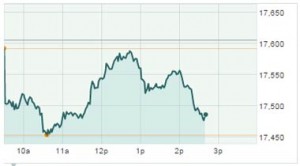 The Dow Jones Industrial Average today (Thursday) was down 127 points heading into the final hour of trading for 2015. The S&P 500 looked as though it was going to finish the year flat, ending a long year of volatility, big gains for tech giants, and a huge downturn for many energy stocks. As of 2:40 p.m., shares of Apple Inc. (Nasdaq: AAPL) were down 2% and were the largest weight on all three major indexes. The tech giant had its first down year for its stock since 2008.

On the economic front, the number of Americans seeking unemployment benefits rose more than expected last week. According to a report from the U.S. Labor Department, unemployment claims jumped by 20,000 to a seasonally adjusted 287,000 for the week ending on Dec. 26. The increase is likely linked to the end of the holiday shopping season. It was the largest increase since July 2015.