For Feb. 10, 2016, here's the top stock market news and stocks to watch based on today's market moves… 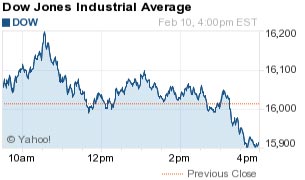 On the economic front, Fed Chairwoman Janet Yellen questioned the legality of negative interest rates during her testimony before the House of Representatives. Yellen said struggles in the financial sector and the ongoing contraction of the Chinese economy were threats to the U.S. economy; however, she also added the central bank is very unlikely to cut interest rates again in the near future.

With today's losses, many investors fear we're headed for a stock market crash, correction, or bear market. Here's what our Money Morning experts predict will happen in 2016…