The Dow Jones Industrial Average ended up on the week but mixed on the day… Investors remain focused on the upcoming decision by the FOMC on interest rates.

The optimistic calls from U.S. Federal Reserve members over the health of the U.S. economy received a bit of support today on news the economy expanded by 1% in the fourth quarter, more than the Commerce Department's first estimate last month. However, this isn't completely positive. The boost relied more on a stockpiling of inventories, which could suppress economic activity over the first quarter of 2016. The weekend is here, so celebrate while you can… 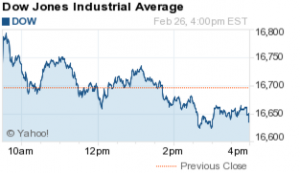 The ongoing banking sector downturn in Europe went from bad to worse. This morning, Royal Bank of Scotland Group Plc. (NYSE: RBS) announced a multibillion-dollar loss in the fourth quarter and its eighth consecutive year of losses. This company has not posted an annual profit since 2007. If you're not paying attention to what's happening in Europe, you're not only exposing yourself to serious risk, you're also missing out on short-term profit plays. Money Morning Global Credit Strategist Michael Lewitt has outlined a $200 trillion credit collapse that is coming soon, and this one bank is the match that is going to set the entire financial system on fire. Read it, right here.

Oil prices fell slightly lower today despite a decline in the weekly U.S. rig count. Despite today's loss, Brent crude gained more than 6% this week and is on its way to the price target recently set by Money Morning Global Energy Strategist Dr. Kent Moors. Here's why oil prices are moving even higher in 2016.

No megadeal is happening in the defense sector. This afternoon, industrial conglomerate United Technologies Corp. (NYSE: UTX) turned down a $90.7 billion takeover bid from Honeywell International Inc. (NYSE: HON). Executives at UTC said agreeing to the deal would be "irresponsible" due to the regulatory scrutiny and expected divestitures that would be necessary to obtain approval.

But the big talk today was the U.S. Bureau of Labor Statistics' report that GDP increased by 1% in the December-ending quarter. Economists had expected a downward revision to 0.4% from last month's first estimate of 0.7%. The number offers a boost of support to recent statements by members of the Fed about the health of the U.S. economy. However, high inventory levels are raising concerns about the production levels in the first three months of 2016. Increased inventory reduces businesses' incentives to place new orders, which reduces new production demand.

"Super Tuesday" is only four days away. On Super Tuesday 2016, 12 states and one U.S. territory will hold their primary elections in what amounts to an electoral frenzy. Here's everything you need to know about one of the most important events of the election cycle…