It has been a full week since British voters decided to depart the European Union, and markets are almost back where they started. The Dow Jones Industrial Average today (Friday, July 1) pushed higher as investors anticipate the Bank of England will unleash some form of stimulus, particularly a cut to its already low interest rates of 0.5%.

The Dow Jones and the S&P 500 had their best week of 2016, fueled by feverish optimism from the post-Brexit vote, stronger economic data, and value investing. The Dow added 19 points and received a strong boost from Harley-Davidson Inc. (NYSE: HOG), which added 20% thanks to takeover rumors. Meanwhile, the Nasdaq and the S&P 500 were moving higher thanks to a 5.7% gain from Netflix Inc. (Nasdaq: NFLX).

It was a very busy week rocked by big headlines in the financial and energy sectors. But too many important stories might have slipped under the radar, and we're here to talk about what you might have missed on Friday. 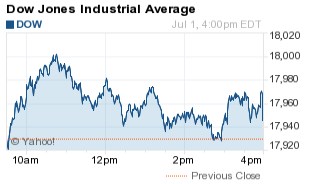 Today, the Dow Jones added another 19 points, while the S&P 500 was almost back to pre-Brexit levels. It appears many investors are not phased by the 850-point drop that happened last Friday and Monday. In fact, some argue Britain may never actually invoke Article 50 and leave the European Union. According to a new poll by BBC Newsnight, one-third of British voters do not believe the Brexit will ever happen.

The price of gold was on the move again after a strong June. The yellow metal gained 8.8% over the previous month, and there are likely more gains on the horizon. Meanwhile, silver prices were on pace for their best week since 2013. Silver prices are up 8% this week. Where are silver prices heading in 2016? You can find that answer, right here.

Crude oil prices were off slightly this morning as investors anticipate supply problems in the global market. OPEC was pushing toward a record 32.82 million barrels produced each day (bpd) last month. WTI crude slipped 0.5% this morning, while Brent crude was off 0.5%.

Shares of Yahoo! Inc. (Nasdaq: YHOO) were in focus today as shareholders reflect on the company's annual shareholder meeting. YHOO stock is up 14% so far this year as it continues to explore strategic options. CEO Marissa Mayer said the company is working hard to sell part of the company. The firm's core Internet business has attracted bids from companies like Verizon Communications Inc. (NYSE: VZ) and AT&T Inc. (NYSE: T).

Shares of General Motors Co. (NYSE: GM) and Ford Motor Co. (NYSE: F) were both up more than 1% after U.S. manufacturers released positive June auto sales numbers. But the real story in the auto sector is how U.S. regulators are investigating the autopilot features of Tesla Motors Inc. (Nasdaq: TSLA). Regulators began scrutinizing the company after the fatal crash of a 2015 Model S. TSLA stock was still up 2% on the day.

Now, let's look at the day's biggest stock movers and the best investments during these times of global uncertainty.

By using these three penny stock strategies, you can separate promising penny stocks from the ones that aren't worth your time…

The 5 Most Significant IPOs to Watch This Year: There was hardly any IPO activity last year. But we're tracking these five companies to see if they'll go public in 2016. If they do, they'll be the most promising deals of 2016…