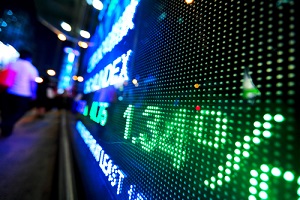 The post-Brexit rally faded on Tuesday as investors grow concerned about the health of the global economy.

The biggest weight on the Dow Jones Industrial Average today was Goldman Sachs Group Inc. (NYSE: GS). The investment bank's stock slipped 2.7% due to macroeconomic fears and worries about the European Union. The financial sector was again hammered due to Brexit worries.

European banking stocks were the worst hit today. Shares of Societe Generale (OTCMKTS: SCGLY) fell 6%, while Royal Bank of Scotland Group Plc. (NYSE: RBS) shares were off 8.3%. Shares of Credit Suisse Group AG (NYSE ADR: CS) plunged 5.7%. Money Morning Capital Wave Strategist Shah Gilani predicts there is more pain to come. He explained this morning that the Brexit has produced Europe's "Bear Stearns Moment" and that investors must be careful in the months ahead.

On the U.S. front, shares of JP Morgan Chase & Co. (NYSE: JPM) slipped 3.4%, while Morgan Stanley (NYSE: MS) dropped 3.7% due to its exposure to a European financial sector on the brink. But the post-Brexit rally and its subsequent fade wasn't the only major story in the news today. In fact, investors might have missed some other major events and profit opportunities.

Today, the Dow Jones shed 108 points as materials and energy stocks sank due to falling oil prices and wild swings in global currencies. Forex trading dominated the day-time discussion with the euro and the British pound sliding against the dollar. The big winner today was the Japanese yen, which is a common place investors put their money in times of uncertainty. Investors were flocking to gold and to the yen after the Bank of England raised concerns about the stability of the United Kingdom's financial situation in the wake of the Brexit.

May was a bad month for U.S. manufacturing production – the Commerce Department announced that new orders fell by 1%. This is a concerning figure given that the manufacturing sector had seen two solid growth months before this report.

Silver prices were up 1.9%, nearly topping $20 per ounce. Meanwhile, gold prices popped another 1.4%.

But the big story today centered on crude oil prices, which cratered as concerns about global economic growth weighed on investor sentiment. Traders now seem concerned about oversupply as production comes back on line in fire-ravaged regions of Canada and in Nigeria, where militants continue to attack the nation's energy supply chain.

WTI crude slipped as much as 5.2% in Tuesday trading, the largest single-day drop since Feb. 9. Meanwhile, Brent crude was off 4.1%.