On July 12, the International Tribunal for the Law of the Sea -- dubbed "The Hague Tribunal" due to where the international organization is located in the Netherlands -- will issue its ruling on China's claim to practically all of the South China Sea.

You see, China asserts that it owns almost 90% of the regions in the South China Sea. These territories span 1,000 kilometers from China's mainland -- while coming within less than 100 kilometers off the coasts of the Philippines, Malaysia, and Vietnam, who also claim the area: 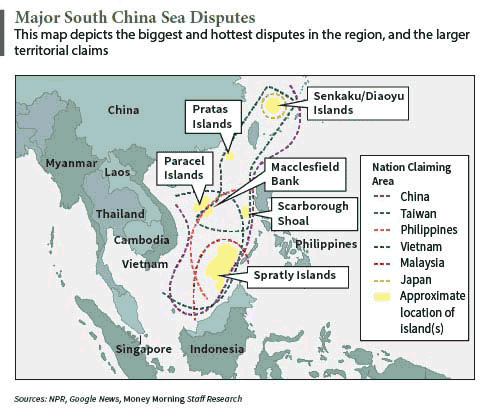 In 2013, the Philippines filed an official dispute against China at the Permanent Court of Arbitration in The Hague. The nation seeks a ruling on its right to exploit the waters near the islands and reefs it occupies in the South China Sea.

Money Morning Executive Editor William Patalon III, who's been following the dispute since 2012 (way before the mainstream media picked up on it), pointed out that China has already flat-out said it will ignore The Hague's decision...

"Beijing has repeatedly said it wants to negotiate with each country separately and avoid a big multilateral negotiation," Patalon explains, "Kind of a 'divide-and-conquer' strategy -- one that will blunt some of the U.S. efforts to be involved."

But, according to China, the Philippines have shirked repeated calls for talks. On June 8, the Ministry of Foreign Affairs of the People's Republic of China issued a statement accusing Manila of acting in bad faith and reneging on pledges to resolve matters through bilateral discussions.

And this is what prompted the Red Dragon to resort to intimidation tactics, ramping up its military presence in the South China Sea to conduct maritime drills.

Patalon believes there is evidence that China's recent muscle-flexing is working. "The Philippines, with its new administration, already appears to be weakening," Patalon writes, "while other countries have asked the United States to back them. Vietnam, for instance -- we've seen some dramatically warming relations of late." (This relational warming, by the way, caused China to issue a stern warning to the U.S. in May).

As far as the impending Hague tribunal is concerned, according to the 1982 United Nation's Convention on the Law of the Sea treaty, China is well within its right to assert that the disputed maritime region belongs to it.

However, The Hague is expected to rule in favor of the Philippines. This could have lasting implications for both China and for world peace.

Because, already, more military contenders are moving forces into the region...

On July 3, the U.S. Navy's Task Force 70 moved into the region to "maintain the seas open for all to use," reported The Wall Street Journal.

In response, China's President Xi issued a barbed statement a day later, saying that he did not appreciate Washington meddling in China's affairs in the South China Sea and that his country is "not afraid of trouble," reported RT.com.

But Beijing is ready to start negotiations with the Philippines if Manila agrees to ignore the high court's ruling next week, the official China Daily reported on Monday.

The Philippines' new president Rodrigo Duterte announced yesterday morning that Manila is likewise ready to talk to Beijing, not go to war.

But, Duterte added, "the country will proceed accordingly after it obtains a copy of [The Hague's] judgment, and will base decisions on the Philippines' greater interest," reported The New York Times yesterday.

William Patalon's extensive research into the South China Sea conflict has proved beneficial for readers of his Private Briefing newsletter. They understand the greater economic and political implications of the maritime mess and of The Hague's impending decision.

On July 5, Patalon issued a detailed list of the "spin-off effects" the feud will likely create -- and how they'll affect investors back in the States. Here's a look at why the South China will set a new standard of American living....