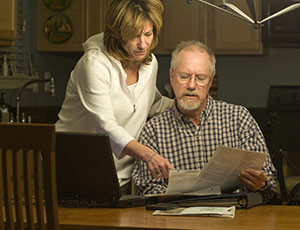 The baby-boom generation consists of 76 million Americans. Currently, they are retiring at a rate of about 10,000 per day — and will continue to do so until 2030.

Around that same time, the Social Security trust fund is due to run out. By the year 2034, specifically.

A lot can happen between now and then. But if Washington can't close the gap between tax revenue and Social Security spending in the near future, there will be major cuts to Social Security benefits…

Cuts that could push baby boomers into poverty.

But the news gets even worse……

An April 2016 study by the Insured Retirement Institute found that, as of right now, 45% of baby boomers have no retirement savings at all.

Mind the (Generation) Gap: Baby boomers and millennials go together like Old Bay seasoning and vanilla ice cream. And statistics prove as much. Here's a look at the disparity between the two generations…

And that percentage is actually on the rise: 42% of baby boomers had no savings in 2015 — historically the figure has been around 25%.

And Washington is still yet to make a definitive move, though politicians are considering a slate of alternatives to fix the doomed system. These alternatives include increasing taxes and reducing benefits to high-income earners.

But there's another idea being touted by policymakers: Social Security privatization….

Should We Privatize Social Security?

One of the most controversial proposals to fix the shaky Social Security program is to partially privatize it. Currently, Social Security is housed by the Social Security Administration – an agency that is part of the federal government. Privatization would allow workers to manage their own retirement funds through personal investment accounts.

There are several pros and cons to the privatization model. Have a look at these arguments for and against it…