WTI (West Texas Intermediate, set in New York) and Dated Brent (set in London) may be the dominant benchmarks for crude oil trading, but that doesn't really tell the story.

Just because these oil prices are set daily in New York and London hardly means that the U.S. and European markets are calling the shots.

And analysts are finally coming to understand that the true price of oil is no longer determined in the West.

The so-called "mature" developed economies may still hog oil finance (at least for the time being), but the country driving demand for the actual crude, and the products derived from it, lies elsewhere...

And that "elsewhere," as I've often remarked, is Asia. All signs indicate that overall aggregate energy demand, and crude oil in particular, will gravitate to Asian markets for at least the next 25-30 years.

Profit Opportunity: The Easiest Way to Profit from "Range-Bound" Oil

Both of these figures are the highest ever recorded.

Asia currently accounts for a full third of the worldwide total, and that's just the beginning... Demand there is set to rise quicker than in any other place on Earth. While demand figures are expected to languish for North America and Western Europe, initial indications point toward Asian demand accounting for 40% of the total by 2030.

Now when this is brought up, all eyes turn to the latest figures from China...

China's Time as the Driving "Dynamo" Behind Oil Demand Is Over 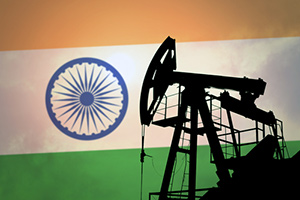 It seems every few days one pundit or another is pointing toward the latest surveys of Chinese economic prospects, GDP, or steel production to provide some crystal ball view of where the world's largest importer of oil is heading... and by implication the global energy market along with it.

What comes out of Beijing is important to be sure. But its importance to both Asia and the broader international oil market is about to be taken over by another developing country...

The two dynamos driving oil prices will both be Asian. Any cooling off of the Chinese expansion will be offset by the accelerating rise in Indian demand. In their fixation upon all things Chinese, most market observers have yet to comprehend that the baton is being passed.

In Oil, India Is the New China

Helima Croft, managing director and Global Head of Commodity Strategy at RBC Capital Markets laid it out. Helima and I have differed in the past, but this time, she is spot on:

"We think India is roaring right now and will be a key driver of demand," Helima told CNBC's "Futures Now" last week. While RBC sees continuing choppiness in the crude market, its analysis also points toward a balancing of supply and demand by the end of this year and slowly rising prices.

Last week as well, the IEA reported that oil demand in India had just grown faster than any other three-month period over the past 10 years.

Investor Alert: Terror and Chaos Can't Stop the Markets, but I Know What Will

Meanwhile, according to the Indian Oil Ministry's division of Petroleum Planning and Analysis, the country used 48.5 million tons (about 369 million barrels) of oil products during the quarter beginning April 1, a hefty 7.8% increase year on year.

This is the highest spike in Indian oil demand since an 8.4% rise for the first quarter of 2007, and the first time that the country has exceeded a 4-million-barrel-a-day consumption average.

The IEA put improving individual disposable income levels and a rise in infrastructure spending as the reasons. Still, this was quite unexpected...

India's Oil Demand Is Breaking Records... Out of Season

You see, Indian demand levels are usually lowest during the first quarter of just about any year, and rise as the year progresses.

The overall IEA conclusion is noteworthy, and indicates that a massive shift in market impact is underway. The agency now expects India to be the world leader in oil demand and surpass Japan (another Asian major, by the way) as the third-largest user of crude oil and oil products before the end of this year.

In addition, the IEA projects India as the fastest-growing consumer of crude in the world through 2040.

Here their initial estimates (despite such figures certainly being very provisional and subject to successive revisions this far out) are for a rise of 6 million barrels a day for India against 4.8 million for China.

The combined demand increase for these two countries alone is estimated to account for almost 50% of the entire global demand growth by 2035.

So the next time some TV talking head opines about the sluggishness of Chinese economic prospects, remember this: There's more to Asia's developmental dynamo than just China... and it's poised to take over.

And that means energy investors need to look opportunities that tie into the Indian market - something we'll be tracking closely in Oil & Energy Investor.

Give Your Portfolio a 326% Performance Advantage: Everything you need to grow your wealth like never before is in this guide - including a strategy to outperform the S&P 500 by triple digits. You'll also get five stocks backed by "unstoppable trends" for solid gains in any market conditions. Click here to start making more money today...