The TPP (Trans-Pacific Partnership) is a hot-button issue in this 2016 presidential race. It's especially paramount to American workers...

Those for the agreement, such as President Barack Obama, claim it will improve American manufacturing by removing tariffs.

But those opposed to the deal, including GOP presidential nominee Donald Trump, say it expands corporate rights across member states to the disadvantage of U.S. workers. Specifically, they believe millions of jobs could be lost in the name of "free trade."

Democratic presidential nominee Hillary Clinton was once a staunch supporter of the TPP...

"That is the spirit behind the Trans-Pacific Partnership, the so-called TPP, which we hope to outline by the time of APEC in November, because this agreement will bring together economies from across the Pacific -- developed and developing alike -- into a single trading community," Clinton said on Jan. 25, 2011, at the Principles for Prosperity in the Asia-Pacific conference in Hong Kong, according to the U.S. Department of State website.

More recently on Jan. 18, 2013, the former first lady told policymakers in Washington, D.C., about a discussion she'd had with Japanese Foreign Minister Fumio Kishida earlier that day: "We also discussed the Trans-Pacific Partnership and we shared perspectives on Japan's possible participation, because we think this holds out great economic opportunities to all participating nations." (U.S. Department of State website, 2013)

Should American workers strongly vested in the outcome of the TPP believe her when they take to the polls in November?

On July 26, Democratic presidential nominee Hillary Clinton's campaign manager John Podesta reiterated the former first lady's opposition to the TPP, which was signed by the United States and 11 other nations in February.

"Hillary opposes TPP BEFORE and AFTER the election. Period. Full stop," he tweeted.

You see, McAuliffe had admitted to Politico earlier that day that a Hillary Clinton presidency would mean a continuation of the TPP deal.

"I worry that if we don't do TPP, at some point China's going to break the rules -- but Hillary understands this," he told Politico. "Once the election's over, and we sit down on trade, people understand a couple things we want to fix on [the TPP], but going forward we got to build a global economy."

This was a particularly damaging statement because it hints that the former first lady's supposed disapproval on the multinational agreement is a farce.

Editor's Note: The list of Hillary Clinton lies is long, but most of those were told to protect her career or to burnish her image.

Realizing that he'd accidentally let slip Clinton's clandestine support of the deal, Gov. McAuliffe has since tried to walk back his remarks. In an interview the following day with MSNBC's Andrea Mitchell, he said Clinton "would only go forward [with the TPP] if the changes that she wants are implemented and that everyone is in agreement."

But that didn't help. Gaining all TPP partners' collective agreement would entail negotiating the entire deal.

McAuliffe then told reporters that Hillary Clinton is against TPP and she is always going to stay against the TPP. "Let me be crystal clear about that," he said.

But the damage was done. The American public now has yet another reason to believe that Clinton will flip-flop on the issue should she achieve the Oval Office.

You see, flip-flopping on trade has become a hallmark of her career...

Hillary did some role reversals following her husband's implementation of NAFTA (the North American Free Trade Agreement) in 1994. 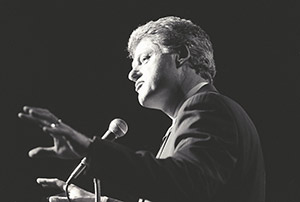 On March 6, 1996, at an event at the Nicole Miller Company in New York, she said, "I think everybody is in favor of free and fair trade. I think NAFTA is proving its worth."

But then in 2000, the former first lady told members of the Working Families Party a completely different story. "What happened to NAFTA, I think, was we inherited an agreement that we didn't get everything we should have got out of it in my opinion," she said. "I think the NAFTA agreement was flawed. The problem is we have to go back and figure out how we are going to fix that."

This "change of heart" had to do with how much of a disaster NAFTA proved to be six years later.

The United States went from having a $5.5 billion trade surplus with Mexico before NAFTA to having a whopping $16 billion trade deficit in 2000, reported the Journal of Commerce that same year.

And the Economics Policy Institute estimated the deal had also cost 400,000 Americans their manufacturing jobs in just the first three years following the agreement's implementation.

Much like Clinton was with the deleterious NAFTA deal, she was once a fervid supporter of the TPP.

In fact, on June 15, 2015, CNN published 45 instances in which she approvingly invoked the bill that she now, suddenly, opposes.

And the stakes couldn't be higher for U.S. workers...

CHART: How a Hillary Clinton Presidency Could Lead to More Job Loss

The Office of the U.S. Trade Representative touts the Trans-Pacific Partnership as a balanced agreement that will promote economic growth, enhance innovation, and create jobs.

But we've seen this kind of pro-growth rhetoric before.

From another Clinton, no less.

In 1993 - the year NAFTA was passed by Congress -- former President Bill Clinton claimed it would create 200,000 jobs in its first two years and a million jobs in five years.

Don't Miss: Several of President Bill Clinton's policies opened the door to the Wall Street excesses that gave us both the dot-com crash of 2000 as well as the financial crisis of 2008.

But claims that trade and investment deals would support domestic job creation proved to be empty promises.

The reason is simple: Expanding exports alone is not enough to ensure that trade adds jobs to the economy. Increases in U.S. exports tend to create jobs in the United States, but increases in imports actually lead to job loss by destroying existing jobs and preventing new job creation. This is because imports displace goods that otherwise would have been made in the United States by American workers. 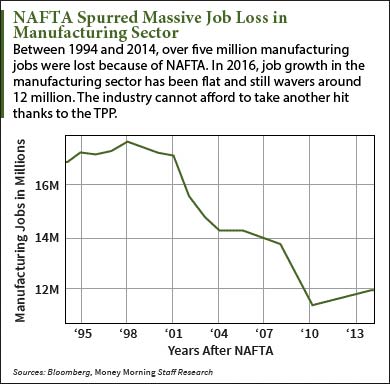 Labor unions pushing back against the TPP today remember this.

And they understand full well that the same situation could replay itself under another Clinton presidency.

Up Next: Here's a closer look at the Trans-Pacific Partnership, and why Donald Trump thinks it's proof of our current administration's incompetence...