In the wake of today's (Tuesday) European Commission ruling that it is owed $14.5 billion in unpaid Apple taxes, the tech giant at the heart of the controversy actually has very little to worry about.

And it's not just because Apple Inc. (Nasdaq: AAPL) is hugely profitable.

But before we get into the real reason why the European Commission's ruling can't hurt Apple, here's what investors need to know about today's Apple taxes news.

After a two-year investigation, the European Commission determined that Apple's tax arrangement with Ireland violated European Union (EU) law. Specifically, Ireland issued two tax rulings, in 1991 and in 2007, that effectively allowed Apple to route nearly all of its foreign profits through Ireland.

Related: The 30 U.S. Companies With the Most Profits Stashed Overseas [CHART]

And by using yet another scheme that transferred most profits to a "head office" not located in any country, the Commission said Apple ended up with "an effective corporate tax rate of 1% on its European profits in 2003, down to 0.005% in 2014." 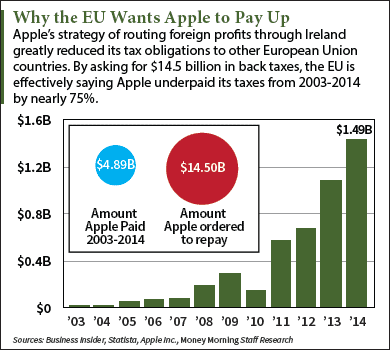 The Apple Taxes Fight Is Just Getting Started

"The European Commission has launched an effort to rewrite Apple's history in Europe, ignore Ireland's tax laws, and upend the international tax system in the process," CEO Tim Cook said in a letter posted on Apple's website.

Both Cook and the Irish government vowed to fight the ruling on Apple taxes, suggesting that a final resolution is years away.

That's probably why Apple stock reacted mildly to the news, dropping about 1% on Tuesday.

But that's not the only reason AAPL investors have little to fear from the EU Apple taxes ruling, at least its impact on the company's bottom line.

That's because Apple has long planned for this day (or one like it).

Why the Apple Taxes Ruling Can't Inflict Much Damage

Most multinational companies assume in their accounting that they'll never bring home the profits they earn overseas. Such profits are considered "permanently reinvested," and so will never be subject to the 35% U.S. corporate tax rate.

But Apple does things differently. Even though most of its cash is held by its overseas subsidiaries ($186.9 billion worth as of September of last year), Apple assumes that someday it will bring it home to the United States.

And so each quarter, Apple dutifully calculates how much tax it would owe on its foreign earnings, subtracts that sum from its profits, and sets it aside as "deferred tax liabilities."

In last year's 10-K filing, Apple said it had accumulated $24 billion in deferred tax liabilities, an amount that's certainly increased in the two quarters since then.

This money had been earmarked for the U.S Treasury. But if the EU AAPL taxes fight somehow goes against the U.S. tech giant, the company has a well-stocked fund at the ready.

Apple said as much in a FAQ posted to its website today.

"We do not expect any near-term impact on our financial results nor a restatement of previous results from this decision," the company said. "We have previously accrued U.S. taxes related to the income in question. The tax rate guidance for Apple's fourth fiscal quarter that we provided on July 26, 2016, does not change as a result of this decision."

In other words, the impact of any EU Apple taxes on earnings will be zilch. The $24 billion-plus Apple has set aside is more than enough to cover the full $14.5 billion the European Commission is seeking.

But there is a big loser here…

Why the U.S. Government Is Taking Apple's Side

While the U.S. corporate tax rate is 35%, any taxes paid to foreign countries is subtracted from what a company owes to the U.S. Treasury.

If the European Commission wins its case on Apple taxes, no doubt more investigations would follow against other U.S. multinationals, along with fat tax bills owed to the EU.

All of those taxes will reduce the potential revenue that the United States would collect in the event those profits are brought home. If the U.S. corporate tax rate is lowered to 25% or so, more companies would consider repatriating their profits.

But the lower rate combined with a bigger EU tax bite would cut deeply into the potential U.S. tax revenue.

With some $2.5 trillion in overseas U.S. corporate profits sitting untaxed, it's no wonder the Treasury Department is a little stressed right now.

But that also means that Apple has a powerful and motivated ally in this fight – one more reason for Apple investors not to sweat this news.

Next Up: The Internet of Things revolution will create a $6 trillion market – and these five stocks are the best way to grab a piece of those gains for yourself.

If this liability had been foreseen and accounted for, why then was it disclosed in the MDA as a "risk factor"; in the Tax footnote, as one whose impact could not be estimated?

Apple couldn't estimate the Irish tax bill that the EU would decide the company owed, only that it would be based on 10 years of earnings. In fact, just days before the decision, rumors had put the figure at about $2 billion, far below the actual $14.5 billion figure.

Plus, companies need to be very comprehensive when describing their risk factors. Hop this helps.