Apple stock is a buy right now no matter what happens during Wednesday's iPhone 7 unveiling.

Part of that has to do with the low expectations for the iPhone 7, the latest version of Apple Inc.'s (Nasdaq: AAPL) flagship product. Another part of it has to do with the flat performance of AAPL stock over the past 12 months (it's down 1.2%, while the S&P 500 is up about 13.5%). 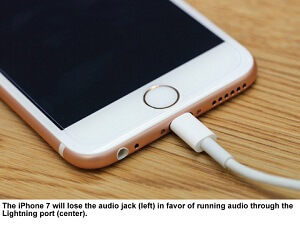 And part of it has to do with next year's iPhone - but we'll get to that in a minute.

One reason for the ho-hum performance of Apple stock has been months of rumors that the iPhone 7 models will lack a "killer feature" to compel upgrades.

They're expected to look almost exactly like the current iPhone 6s models, for example. And most of the rumored changes - a better camera, a faster processor, a couple of new colors - are pretty routine.

Meanwhile, investors have reservations about what the iPhone 7 models will lack...

Why Wall Street Is So Focused on the iPhone

If the rumors are true, the iPhone 7 will not have a conventional audio jack. Instead, Apple is expected to include a set of earbuds that will plug into the Lightning port, which also serves as the charging port.

The fear is that many customers, especially those who use third-party audio devices with their iPhones, will reject such a drastic change. If enough disgruntled users take a pass on the iPhone 7, sales of the new models will slump.

This concerns Wall Street because the iPhone accounts for about two-thirds of Apple's revenue.

To be sure, the iPhone 7 is unlikely to have the impact of the iPhone 6, which debuted in September 2014. 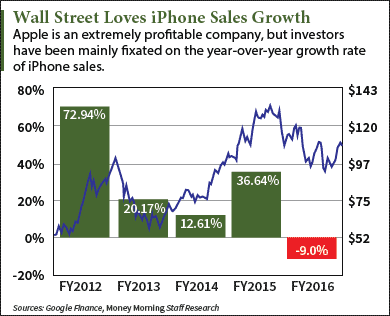 That was the year the iPhone got larger screen sizes. The much-desired feature triggered a 36.64% increase in year-over-year iPhone sales for Apple's fiscal year 2015 -- and drove the AAPL stock price up about 30% over the following three quarters.

But the real question is whether the iPhone 7 will fare better than the iPhone 6s. Last year's model hasn't been able to match the blowout numbers of the iPhone 6. Sales of the iPhone declined for the first time ever in the March quarter and did so again in the June quarter.

That news dropped AAPL stock about 14% in April and May.

Here's why that won't happen this time - and why the iPhone 7 doesn't need to be a smash hit for the Apple stock price to see gains over the next 12 months...

Where the comparisons to the iPhone 6 sales hurt the iPhone 6s, the iPhone 7 will get compared to the lower iPhone 6s numbers. Reporting positive numbers, even if they're not the highest ever, will soothe Wall Street's nerves.

And it's also possible that the iPhone 7 will sell better than its critics think.

You see, the iPhone 7 may not have one killer feature, but a couple of its minor improvements have a good chance of juicing sales.

First among them is the increase in the base memory from 16 gigabytes to 32 GB. Not having enough room for the endless photos and videos people want to shoot is a major pain point with the iPhone. (Apple also is said to be raising the memory upgrades to 128 GB and 256 GB.)

Another feature that customers have long wanted is greater water resistance. The iPhone 7 is expected to have IPX7 water resistance, enough to withstand splashes and even full immersion for up to 30 minutes.

As for the missing audio jack, that's a temporary controversy. In short order, third parties will be offering high-quality earphones that use the Lightning port. And because the Lightning port is a far superior technology (the venerable audio jack was invented in 1878 for telephone switchboards, for Pete's sake), it won't take long for people to embrace it.

Related: What Everybody's Missing in the EU Ruling on Apple's Taxes

Plus, the iPhone 7 has already gotten a big stroke of luck. Samsung, Apple's primary competitor in the Android world, was forced to recall its new flagship smartphone, the Galaxy Note 7, last week after reports of exploding batteries.

So the iPhone 7 should produce sales healthy enough to propel AAPL stock higher. But even in the unlikely event it doesn't, Apple stock is still a buy. Let me explain...

A Major Apple Stock Catalyst Is on the Horizon

Next year marks a special milestone for Apple - the 10th anniversary of the debut of the first iPhone in 2007.

Next year's iPhone will undoubtedly be extraordinary. The rumors already have started circulating.

One possibility for the iPhone 8 (?) is the use of OLED technology for the screen, which is thinner, more power efficient, and offers more vivid colors.

Another is wireless charging, but not the kind where you need to place the phone on a pad. Bloomberg reported earlier this year that Apple is working on a technology that will feature wall-mounted wireless transmitters that will charge devices from a limited distance (in the same room) while in use.

It's also likely we'll see significant changes in the form factor, including a glass body and an edge-to-edge display.

Apple analysts have taken to calling this an iPhone "super-cycle." And if anything can drive Apple stock to new highs, it's an iPhone super-cycle.

With AAPL stock still recovering from its April hangover, now is an excellent time to buy in. Barring a stock market crash, Apple stock isn't likely to get any cheaper over the next 12 to 18 months.

And Money Morning Chief Investment Strategist Keith Fitz-Gerald believes AAPL is destined to hit $200 a share over the next few years...