Libertarian Party presidential candidate Gary Johnson made an embarrassing gaffe this morning (Thursday) at a time when his campaign could really use a popularity boost... 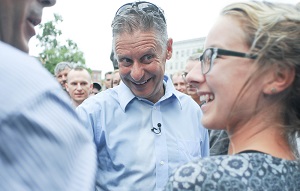 According to RealClearPolitics today, Johnson has 9% support - not much of an uptick from the 8.5% support he had three months ago on June 8. Plus, 9% is still significantly far below the 15% support minimum he needs to reach sometime between Labor Day and Sept. 26 (the day of the first presidential debate) to make it onto the presidential debate stage.

Johnson was questioned about a major flashpoint of the Syrian civil war on MSNBC's "Morning Joe." Co-host Mike Barnicle asked the candidate what he would do, as president of the United States, about the city of Aleppo, which is at the center of the Syrian crisis.

To which Gary Johnson responded: "What is Aleppo?"

This shocked the roundtable hosts. Barnicle then asked, "You're kidding?"

So Barnicle explained: "Aleppo is in Syria. It's the epicenter of the refugee crisis."

Editor's Note: Find out how Money Morning is making investing profitable for retail investors, just like you.

"OK, got it. Got it," Johnson said. The Libertarian candidate then attempted to save face by exerting his knowledge of the conflict. He believes the United States should join sides with Russia in the Syrian conflict to democratically put an end to the conflict.

But another "Morning Joe" host, Joe Scarborough, wouldn't drop Johnson's gaffe. "Do you really think that foreign policy is so insignificant that somebody running for president of the United States shouldn't even know what Aleppo is, where Aleppo is, why Aleppo is so important?" he asked.

"Well no, I do understand Aleppo, and I understand the crisis that is going on," Johnson replied.

Here's a look at this morning's awkward interview...

On top of that, Johnson's verbal slip this morning isn't the first mistake of this nature the Libertarian candidate has made...

Therein, the magazine highlighted one embarrassing blunder the candidate has made - one that again raises questions about Johnson's readiness to take the Oval Office...

At a Pasadena, Calif., political convention in June, Johnson was asked by a reporter why his party tends to "attract a disproportionate number of young white males."

The candidate responded by saying he didn't think there was a diversity problem in the Libertarian party.

Just a few minutes later, however, Johnson was directed to a convention center auditorium named after Harriet Tubman.

"Who's Harriet Tubman?" he wondered aloud.

Next Up: Clinton will nab at least four swing states because of this one recurring economic factor...