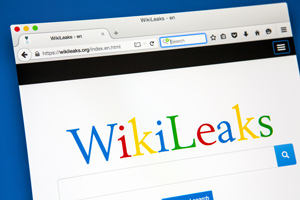 The DNC leak came from infamous hacker "Guccifer 2.0," who handed it over to WikiLeaks for public distribution.

Yesterday's DNC dump revealed that, during President Barack Obama's first bid for the White House in 2008, 57 donors forked over cash to the DNC and the Organized for Action (OFA) group – a community organization that supported Obama.

"Guccifer 2.0" is the hacker (or hackers) responsible for initially breaching the Democratic National Committee computer network in July 2016. It then leaked the documents to both the newspaper The Hill and anti-secrecy website WikiLeaks, headed by editor-in-chief Julian Assange.

Some cybersecurity experts have speculated that Guccifer 2.0's leaks are part of a series of cyberattacks on the DNC committed by Russian intelligence groups.

The name "Guccifer 2.0" is derived from the famous hacker handle "Guccifer" – created by Marcel Lazăr Lehel, who was responsible for a number of high-level computer security breaches in the United States in 2013.

Don't Miss: How Big Money in Politics Bought a Presidential Election – in 1896

The list likewise shows that, as of Nov. 28, 2008 – just weeks after President Obama was elected to his first term – the top three donors on the list were granted powerful government positions by the then president-elect.

Have a look at the powerful gigs these well-heeled patrons were granted:

Brazile rose to her position after the original Guccifer hacked the DNC on July 22, resulting in then DNC Chairwoman Debbie Wasserman-Schultz's resignation.

"The DNC is the victim of a crime: an illegal cyberattack by Russian state-sponsored agents who seek to harm the Democratic Party and progressive groups in an effort to influence the presidential election," Brazile said, according to The New York Times yesterday. "There's one person who stands to benefit from these criminal acts, and that's Donald Trump."

Trump's campaign has not yet responded to Brazile's accusation, nor has Russia.

Meanwhile, the full bundle of documents from yesterday's DNC leak has made its rounds across the Internet – to little surprise.

Or perhaps because people are now starting to accept the reality that "pay-to-play" politics is the norm nowadays.

You see, there is a tit-for-tat relationship between big donors and politicians at every level – national, state, and city. These policymakers need money to fund their campaigns, and, one day, donors may just need to call in a favor.

Check out how much these previous and current top "bidders" have been paid back for their contributions on Money Morning's "Silent Auction for America" site, here…

17501 Reads
These 3 High-Yield REITs Pay 8%, 10%, and 12% Dividends
REITs produce gobs of cash from rent and other fees generated from properties including office buildings, storage units, multifamily units, and more.