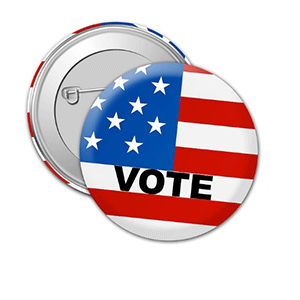 American democracy calls for "a government of the people, by the people, for the people," as Abraham Lincoln famously stated in his Gettysburg Address on Nov. 18, 1863.

You see, the United States uses an Electoral College system — instead of the popular vote — to decide who wins the Oval Office every four years.

That's why one of the most common questions asked during an election is, "What is the Electoral College?"

We're here to answer that question for you.

Exactly What Is the Electoral College?

The Electoral College is a group of people who ultimately elect the president and vice president.

The college consists of 538 electors who are chosen to vote on behalf of their state. The number "538" may seem random, but it is designed to equal our number of congressional members (435 representatives, 100 senators, plus three more from the District of Columbia).

These 538 electors meet on the first Monday after the second Wednesday in December to cast their votes for president and vice president.

Here's the key: Electors are encouraged – but not required – to cast their votes based off of the popular vote in their state.

How Are Electoral College Members Chosen?

A state's political parties choose potential electors at their state's party conventions or by vote via the party's central committee, so it helps to have long-standing service and dedication to your party.

In terms of other credentials, the U.S. Constitution makes no mention of the qualifications to become a member of the Electoral College, but it does state that they cannot be:

As long as you do not fall into any of the above categories, you are technically eligible to become an elector.

How Are the State Votes Allocated?

Each state receives two votes, or elector spots, automatically. Then, the states receive additional votes according to population count. Originally, this was a problem because the District of Columbia was not recognized as a state and therefore received zero Electoral College votes. In 1961, the 23rd Amendment was passed, which gave D.C. the automatic two votes, plus one more — the same as the least-populated state in America, Wyoming.

Every 10 years, in a process called reappointment, the number of electors for each state is reallocated according to current population. Each state may gain or lose votes during this process.

Trending: Here's What Single-Payer Healthcare Would Do to Your Taxes

Here's the electoral map by state for 2016. The numbers represent how many electoral votes the individual states receive: 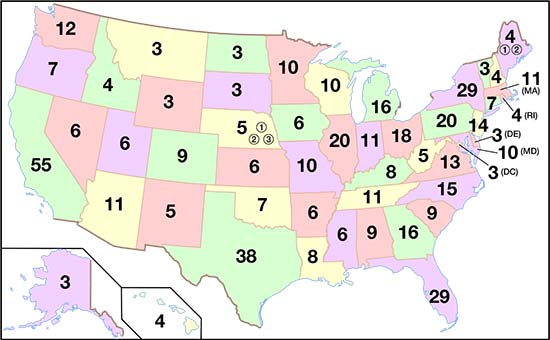 A swing state is a state where votes are fairly evenly split between the two parties. In one election cycle, they may vote Republican, and in the next, Democrat. Typically if a candidate fails to win over the majority of swing states, they'll lose the election. For instance, Florida has cast votes for the winning presidential candidate 75% of the time between 1900 and 2012.

Arguments for the Electoral College vs. Popular Vote

For example, mainly liberal states like California, New York, and Maryland would overpower votes from many other states because of population. In other words, the needs and wants of the people in less-populated states would be ignored during elections.

To the same point, the Electoral College helps to draw attention from presidential candidates to each of the states. If the system were reversed back to solely the popular vote, states with low population rates would be less attractive to candidates. For example, Wyoming, a state with a population of less than 600,000, would be less likely to get any attention from a candidate compared to Pennsylvania, a state with over 12 million residents.

Why does this matter?

Without the Electoral College system, votes from states that have low population rates (North and South Dakota, Alaska, etc.) would essentially be wiped out by states like California, New York, and Texas.

Supporters of the Electoral College also argue that the system promotes a two-party structure, which allows the country to maintain continuity and stability. [Editor's Note: With a majority of voters saying they're unhappy with the two major-party candidates, America may be ripe to consider a third choice…]

The main problem with the Electoral College is that while electors are supposed to vote according to the outcome in their state, they are not required to do so.

And in fact, since the founding of the Electoral College, individual electors have voted against the person the citizens voted for over 80 times.

That's why the opposition to the Electoral College system note this as being the main reason why citizens do not vote at all: It's a system that promotes apathy — not what you want in a democracy that relies on election to achieve the best representatives for the people.

Aside from that, there are also two lesser problems with the Electoral College. First, it's somewhat outdated. It was developed because in the 1800s, casting a vote required you to write your decision on a ballot, give it to a good lad on horseback, and wish him safe travels to Washington. Since then, things have changed…

The system allocates votes to each state, but doesn't account for the citizens who don't live in a recognized state. For example, the people in U.S. territories like Guam, Puerto Rico, and the Virgin Islands do not have electoral votes. That's 4.4 million people that are directly affected by the election but don't get a say in the outcome.

And second, because of the way electoral votes are allocated among the states, some states receive more (or less) votes than they really should. Each state automatically receives two votes, regardless of population size. So a state like Rhode Island, which should only have two votes based on population, gets four votes. This causes a state like Ohio, which should have 20, to only have 18.

Next Up: The real reason Congress gets nothing done isn't partisan gridlock. It's that the primary duty of our elected representatives is no longer making laws – it's this…

It's Time to Change a System That Cheats Third-Party Candidates

Is It Time to Throw Them All Out?

Over the last few decades, presidential election outcomes within the majority of states have become more and more predictable. From 1992- 2012 13 states (with 102 electoral votes) voted Republican every time 19 states (with 242) voted Democratic every time If this 20 year pattern continues, without the National Popular Vote bill in effect, Democrats only would need a mere 28 electoral votes from other states. If Republicans lose Florida (29), they would lose. Some states have not been competitive for more than a half-century and most states now have a degree of partisan imbalance that makes them highly unlikely… Read more »

Electors are required by state laws to cast their votes for their party's candidate. The U.S. Supreme Court has upheld state laws guaranteeing faithful voting by presidential electors (because the states have plenary power over presidential electors). There have been 22,991 electoral votes cast since presidential elections became competitive (in 1796), and only 17 have been cast in a deviant way, for someone other than the candidate nominated by the elector's own political party (one clear faithless elector, 15 grand-standing votes, and one accidental vote). 1796 remains the only instance when the elector might have thought, at the time he… Read more »

America has never used the national popular vote, alone, to determine the presidency. The Electoral College has always elected the President. Unable to agree on any particular method for selecting presidential electors, the Founding Fathers left the choice of method exclusively to the states in Article II, Section 1 "Each State shall appoint, in such Manner as the Legislature thereof may direct, a Number of Electors…." The U.S. Supreme Court has repeatedly characterized the authority of the state legislatures over the manner of awarding their electoral votes as "plenary" and "exclusive." In 1789, in the nation's first election, a majority… Read more »

California, New York, and Maryland would Not overpower votes from many other states because of population. Maryland is only an average sized population state. The 11 largest states, with a majority of the U.S. population and electoral votes, rarely agree on any political question. In terms of recent presidential elections, the 11 largest states have included five "red states (Texas, Florida, Ohio, North Carolina, and Georgia) and six "blue" states (California, New York, Illinois, Pennsylvania, Michigan, and New Jersey). The fact is that the big states are just about as closely divided as the rest of the country. For example,… Read more »

Because of state-by-state winner-take-all laws, not mentioned, much less endorsed, in the Constitution. . . In the 2012 presidential election, 1.3 million votes decided the winner in the ten states with the closest margins of victory. One analyst is predicting two million voters in seven counties are going to determine who wins the presidency in 2016. With the end of the primaries, without the National Popular Vote bill in effect, the political relevance of three-quarters of all Americans is now finished for the presidential election. In the 2016 general election campaign Two-thirds (158 of 234) of the general-election campaign events… Read more »

Again, the system was NEVER solely the popular vote.

With the current system, Wyoming, North and South Dakota, Alaska, etc., are among 24 of the smallest states, that are ignored, and get NO attention in presidential general elections. $0 is spent on TV ads. No visits.

A survey of Wyoming voters showed 69% overall support for the idea that the President should be the candidate who receives the most popular votes in all 50 states.

The RARE faithless electors that have never affected the national outcome are not the main reason why citizens do not vote at all.

State laws that do not treat every voter, everywhere equally are.

Presidential campaigns do not poll, organize, visit, and appeal to more than a handful of states.

One would reasonably expect that voter turnout would rise in 80%+ of the country that is currently conceded months in advance by the minority parties in the states, taken for granted by the dominant party in the states, and ignored by all parties in presidential campaigns.

In Gallup polls since 1944, only about 20% of the public has supported the current system of awarding all of a state's electoral votes to the presidential candidate who receives the most votes in each separate state (not mentioned in the U.S. Constitution, but later enacted by 48 states) (with about 70% opposed and about 10% undecided). Support for a national popular vote is strong among Republicans, Democrats, and Independent voters, as well as every demographic group in every state surveyed recently. In the 41 red, blue, and purple states surveyed, overall support has been in the 67-81% range –… Read more »