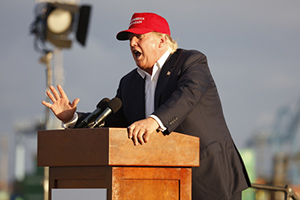 The Dow is on a six-day winning streak and is sitting at an all-time high. This is the Dow's best run since 2011.

Money Morning Chief Investment Strategist Keith Fitz-Gerald has an answer to the question that many investors are asking after the election: "Now what?"

Let's look at the final numbers Monday for the Dow, S&P 500, and Nasdaq:

The Dow Jones added 21 points as financial stocks continued to rise on the prospect of a Trump presidency and a potential rate hike by the Federal Reserve. The U.S. dollar rate today soared to an 11-month high as markets continue to expect an interest rate hike at the next FOMC meeting. According to CME Group's FedWatch Tool, the markets project a 91% probability of a rate hike next month.

The price of crude oil was back near a three-month low under $43 per barrel. Crude prices are falling again as worries accelerate that OPEC's global production deal set in September could quickly fall apart before the global oil cartel meets in Vienna, Austria, later this month. On Friday, OPEC announced that it hit a new monthly production level in October and forecasts an even greater supply output than the one projected last week by the International Energy Agency. The expected output has investors picturing another massive global glut like the one earlier this year that drove crude prices under $30 per barrel.

Trump will have a profound impact on the U.S. economy and the stock market heading into 2017. To help investors break down Trump's expected impact, we put together a must-read guide outlining Trump's policies, stock-market winners and losers, and profiles of his economic team.