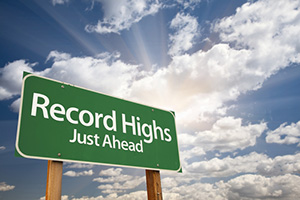 The Dow Jones Industrial Average hit another record on Tuesday as energy stocks surged thanks to rising oil prices.

The Dow Jones added another 54 points on Tuesday thanks to a rally in energy stocks and utility stocks. The S&P 500 energy sector added 2.5%, while utilities gained more than 1.6%. The technology sector also received a big boost after another big day from FANG stocks.

The price of crude oil rallied as much as 5% today after a reversal of expectations regarding OPEC's upcoming meeting in Vienna, Austria. Traders now anticipate that the global oil cartel will reach an agreement to slash production in order to address a building supply glut. The news pushed shares of global multinational oil companies higher. Shares of both Exxon Mobile Corp. (NYSE: XOM) and Chevron Corp. (NYSE: CVX) gained nearly 2%.

It was a very strong day for retail stocks. In October, consumers boosted spending on goods ranging from vehicles to household items. The Commerce Department announced that retail sales increased 0.8% in October. The data indicated that improved economic optimism will add additional fuel to the Federal Reserve's case for an interest rate hike in December.

But the big news today is the Trump presidency. The president-elect has proposed a massive infrastructure spending program designed to rebuild the nation's road, bridges, and other lines of transit. That could be a huge boost to industrial stocks around the country as Congress pours up to a $1 trillion into the economy. Money Morning Capital Wave Strategist Shah Gilani explains that choosing the best infrastructure stocks for a Trump presidency requires a strategy. He tells you how to invest the right way, right here.