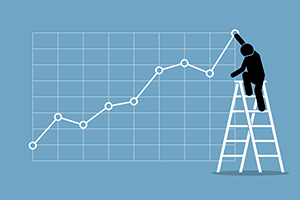 The Dow Jones Industrial Average pushed higher despite a huge slump in oil prices. The S&P energy sector fell by more than 1.1%, with shares of Chevron Corp. (NYSE: CVX) and Halliburton Co. (NYSE: HAL) dropping more than 1.3% each.

The Dow Jones added 23 points after a positive day of economic data that showed President-elect Donald Trump will inherit a strengthening economy. According to the U.S. Commerce Department, Q3 GDP expanded at a rate of 3.2%. That topped Wall Street expectations of 3% and easily beat the first estimate by agency economists of 2.9%. This was the fastest growth increase in roughly two years.

U.S. housing prices are roaring right now. According to the S&P CoreLogic Case-Shiller Index, September 2016 home prices were up 5.5% higher than those in September 2015. Demand continues to surge at a time that there has been limited supply in the nation's largest 20 cities. According to home-buying site Zillow Group, the competition for new homes has grown so much that less than 50% of new buyers are able to buy the first home on which they make an offer.

The price of crude oil plunged as optimism over a possible deal among OPEC producers is fading. Despite a commitment by Iraq's oil minister to cooperate with the global oil cartel's goal of cutting production during the November OPEC meeting, doubts are starting to creep in for traders. Money Morning Global Energy Strategist Dr. Kent Moors says that OPEC is starting to panic thanks to a recent development that rocked the international energy world.

But the big news today was the Federal Reserve was once again in focus after Federal Reserve Gov. Jerome Powell said the case for an interest rate hike in December has strengthened. Powell said in prepared remarks this morning in Washington that the jobs market has strengthened and inflation is moving toward the central bank's target of 2%. His statement is very similar to the overall sentiment of the Fed's minutes from its November meeting.

However, we've seen the Federal Reserve change its mind at the last minute several times in 2016. The last time that the central bank increased rates was in December 2015. Will we see a repeat next month at the December FOMC meeting? We answer that question, right here.