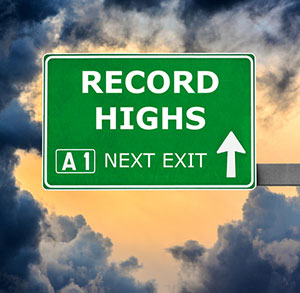 The Nasdaq fell another 1.5%, and the S&P 500 declined after technology stocks had their worst day in months. Shares of Facebook Inc. (Nasdaq: FB) fell nearly 3% after the company received a price downgrade from investment research firm Canaccord Genuity.

The Dow Jones gained 68 points as investors digested a mixed round of economic data and cheered a huge day for the automotive sector. Retail stocks struggled after a bad series of earnings reports, but energy stocks rallied higher thanks to a rally in oil prices. Shares of Chevron Corp. (NYSE: CVX) added 1.7%, while Chesapeake Energy Corp. (NYSE: CHK) gained 4.6% before retreating for a small gain.

The biggest winner today in the energy sector was oil producer W&T Offshore Inc. (NYSE: WTI), which saw its shares rally more than 23%.

The ISM Manufacturing Index increased from 51.9 in October to 53.2 in November, a figure that signaled the expansion of the sector. Meanwhile, the number of Americans filing for unemployment benefits jumped another 17,000 to 268,000. The figure is near a 43-year low and comes a day after ADP reported that the U.S. private sector added 216,000 jobs in November.

Tomorrow investors will be eyeing the November jobs report, which will significantly influence the Federal Reserve's upcoming decision on whether or not to raise interest rates.

The bright spot was PVH Corp. (NYSE: PVH), the owner of the Calvin Klein brand, which gained close to 2%.

It's been a brutal time for retail stocks. Money Morning Global Credit Strategist Michael Lewitt explains that Black Friday was a disaster for the sector. But you can make real money from the demise of traditional retail shopping. Lewitt outlines the best way to profit and invites you to learn more about his secret weapon to capture a whole new round of profits. Read it, here.

The WTI crude oil price today added 2.8% and passed $50 per barrel. Meanwhile, the Brent crude oil price gained 3.5%. Crude prices continue to rise after OPEC announced that it had struck a new accord to cap excessive production of oil. It was the cartel's first official production agreement since 2008. Key to the deal, Saudi Arabia said it would cut its record production to get its arch rival Iran to agree to the deal.

Money Morning Global Energy Strategist Dr. Kent Moors explains that there are still many challenges ahead while pundits and analysts celebrate the ink drying on the agreement. As Moors explains, the global oil cartel must now enforce the agreement. With so many members looking out for their economies, it could be a rocky road. But Moors offers a reason – one reason – for optimism. Here's the one reason why the OPEC deal could succeed and push crude prices up.

The other big development today is the speculation over a huge event happening in Europe this weekend. On Sunday, Italian voters will head to the polls to decide whether they wish to grant their prime minister power to usher in sweeping financial reforms to the country. A "no" vote may put the nation in violation of European Union rules.