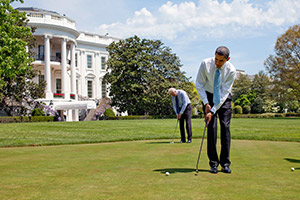 Yesterday U.S. President Barack Obama issued a record wave of clemencies to several individuals. The news broke as he was on a Hawaiian golf course (he's on Christmas vacation).

The latest round of President Obama pardons granted clemency to a total of 231 individuals, the largest single act of absolution in one day during his entire eight-year tenure.

Before we expand on who got pardoned and who didn't, it's important to note that the term "pardon" -- when used by the media -- does not necessarily mean a "blanket pardon," or full exoneration.

Presidential pardons also include rescinded - or voided - fines, as well as sentence commutations. When a sentence is commuted, it is effectively "cut off," or stopped, in its course.

The president's pardons Monday brought his grand clemency total to a whopping 1,324 while in office - more than the four preceding presidents combined and the most of any president since Harry S. Truman.

For his part, Truman commuted or rescinded the convictions of 2,044 people during his term. 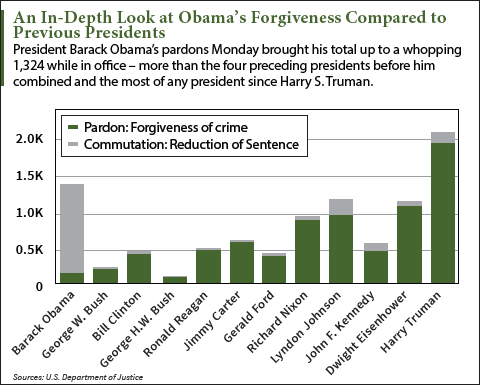 White House Counsel Neil Eggleston spoke to the media in a press conference after President Obama issued his absolutions Monday. There, he admitted that he expects the president to grant even more clemencies in the coming months and added that these actions exemplify President Obama's belief that America is a nation of second chances.

"While each clemency recipient's story is unique," Eggleston said, "the common thread of rehabilitation underlies all of them."

With that in mind, here's a quick look at a few of these unique "second chances" granted by President Obama in the last eight years...

Some have argued that President Obama - who once was infamously considered the stingiest president when it came to presidential pardons - has overstepped his bounds now with his clemency push over the past year.

In May, Sen. Tom Cotton (R-AK) said the current administration is being far too lenient on dangerous convicted drug traffickers with its myriad pardons and commutations.

But around that same time, the president shirked criticism from another front as well, this time for being too strict.

Because that's when the POTUS issued an executive order that turned the entire financial industry on its head, with several GOP congressmen crying, "over-reach, over-reach!"

Here's a look at the president's controversial "fiduciary rule" that's expected to affect retirees' nest eggs as soon as January 2017...