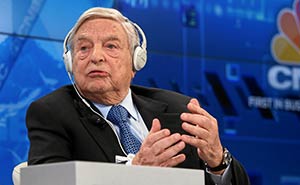 A couple weeks ago we told you how Warren Buffett has enjoyed a $12.3 billion gain from the markets since the election.

You see, the hedge fund activist investor bet against the "Trump Rally."

How Much George Soros Has Lost in the Trump Rally

It all started when Soros returned to trading last year at his firm, Soros Fund Management LLC, which manages roughly $30 billion for the Hungarian-born billionaire and his family.

He was lured back by the opportunities to profit from what he saw as coming economic troubles following the election, according to The Wall Street Journal.

He anticipated economic turmoil, particularly if Trump won the election.

And after the real estate mogul claimed victory on Election Day, Soros became vehemently more bearish than he was going into the month of November 2016 - when he had just been "cautious" about the markets, sources told WSJ.

Which proved to be a mistake...

Stocks and Treasury yields jumped in the wake of Trump's victory, amid the prospects of looser regulations in certain sectors, lower tax rates, and fiscal stimulus.

In all, Soros' massive miscalculation cost him a billion dollars.

Soros purportedly adjusted his positions and exited as many of his bearish bets late last year as he could to avoid further losses, the people added.

However, the broader portfolio held by the activist investor's firm performed better, posting profits before and after the election from long-held investments in sectors including financials and industrials. Those profits helped Soros Fund Management end the year with gains of around 5%.

While Soros has taken a beating from U.S. markets lately, he's also been targeted by opposing forces from his native country of Hungary, as well...

A Billion Dollars Is Not All George Soros Has Lost...

Soros' Open Society Foundation, which finances over 60 Hungarian nongovernmental organizations (NGOs) and has spent more than $1.6 billion on democratic development in Eastern Europe and the former Soviet Union, could be ousted by the Hungarian government.

"All civil society organizations should be 'swept out' of Hungary," the vice chairman of the ruling Fidesz party, Szilard Nemeth, declared Tuesday.

The official also claimed that Soros and his NGOs were "pushing global big capital and a related political correctness into Hungary."

The Open Society Foundation responded to Nemeth's claim by stating it will "continue to work in Hungary despite government opposition to our mission of fairer, accountable societies. In Hungary and around the world we are more focused than ever on working with local groups to strengthen democratic practice, rights, and justice."

Populism and nationalism seems to be rearing its head globally - from Hungary to Britain to the United States.

But there's ideological populism, and then there's the "alt-right" - a far more polemic subgroup of the conservative front whose main activities consist of Internet trolling and making online threats.

Emboldened by Trump's presidential victory, the alt-right has moved to the forefront of American politics. All of us will be affected by the alt-right's message, growth, and tactics - which makes this one of the most important reads of 2017...

Is someone starting to take up a collection for this CREEP ?