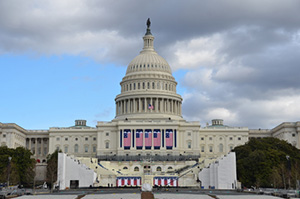 The Dow Jones Industrial Average today was sliding as President Donald Trump prepares for his first full week in office.

The markets are still digesting Trump's protectionist inaugural address, which pledged to put "America first" through a process of buying American products and hiring American workers. Trump has promised to renegotiate the North American Free Trade Agreement (NAFTA) and said he plans to withdraw from the Trans-Pacific Partnership.

The Dow Jones Industrial Average projected a 19-point decline ahead of a busy day of earnings reports and speculation on the Trump administration's economic policies. Despite increased expectations for corporate tax reform and deregulation, investors are concerned about protectionist policies and their impact on global trade. President Trump's inaugural address Friday stirred up fears of protectionism after he said that his policies will endorse the "Buy American, Hire American" motto.

Trending: A 2017 Stock Market Outlook You Won't Get Anywhere Else

Many investors appear to be taking a "wait and see" approach with the Trump administration before they make and big, bold predictions. But Money Morning Technical Trading Specialist D.R. Barton says that you can make a lot of money due to other people's uncertainty. Barton sat down with Money Morning Executive Editor Bill Patalon to discuss on such trade this weekend. Check out out how you can make money this week, right here.

Crude oil prices were falling Monday as increased production levels in the United States overshadowed supply cuts by OPEC. During a meeting among OPEC and non-OPEC producers over the weekend, the global oil cartel said they have taken roughly 1.5 million barrels per day off the market. However, on Friday, Baker Hughes Inc. (NYSE: BHI) reported the largest weekly increase in domestic production rigs in nearly four months. U.S. oil production is now up roughly 6% since mid-2016.

Money Morning Global Energy Strategist Dr. Kent Moors expects both oil and natural gas prices to continue rising by at least 20% in 2017. With energy prices set to climb, investors should read about our three best energy stocks to own in 2017. Check them out, right here.

On Friday, President Donald Trump signed an executive order starting the process of repealing Obamacare. The new president is expected to begin working with Congress this week to provide an alternative to former President Barack Obama's signature healthcare law.