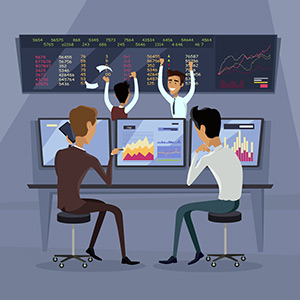 Dow 20k happened this morning just a few moments after the opening bell.

This market milestone sent analysts, media sites, and investors into a celebratory frenzy.

The implications of breaching the DJIA 20k threshold are simple enough to understand: It means expectations for the U.S. economy are improving. Plus it means many investors have made money in 2017.

But there's an arguably more important market milestone on the horizon. One that could, and perhaps should, overshadow Dow Jones 20k – and one that's being ignored with today's 20k hoopla.

You see, the Dow isn't the best measure of how American businesses are performing overall. That 20,000 figure is only based on the share prices and performances of 30 of the largest companies in the U.S.

Indeed, the S&P 500 – given its namesake – is comprised of 500 of the largest publicly traded companies in the United States, encompassing the following 10 wide-ranging sectors:

Right now, the S&P 500 is on the verge of hitting its own milestone…

As far as the index's long-term percentage increase is concerned, since Nov. 8, it's spiked a full 7%… 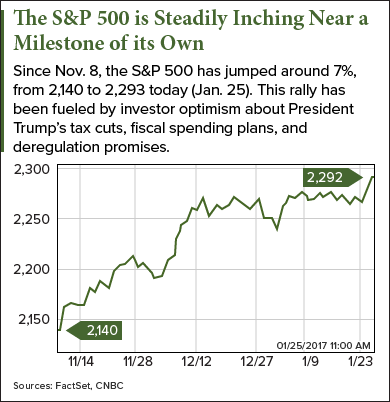 The reason why the S&P 500's milestone is considered by some analysts, including Barr, and many companies to be of greater significance than Dow 20k is because the index gives firms more weight in its calculation based on their float – i.e., the value of shares available to be invested in.

The Dow, on the other hand, is a price-weighted index, which means that stocks with higher prices have more influence on the index's value.

And while the Dow index's value is currently about $5.6 trillion – nothing to sneeze at – the S&P 500 has a market value of nearly four times that amount: $19.5 trillion.

Money Morning Global Credit Strategist Michael Lewitt has never been one to follow the consensus view. He is known for calling out those who make off-the-mark calls.

He is also known for making bold calls himself.

And he just offered a full market forecast for 2017, which includes a surprisingly dire projection for the S&P 500…