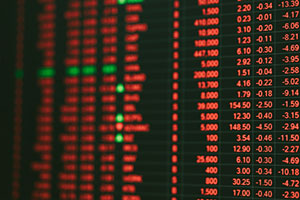 The Dow has soared 13% since Election Day, and just last week (Feb. 10), all three major indexes closed at all-time highs. The "Trump Rally" has been great for stocks, but some observers are starting to wonder if soaring highs mean a stock market crash is coming.

No one can predict a stock market crash with 100% certainty. But we want our readers to be as informed as possible about what could happen in the market.

That's why we're looking into historic stock market crashes to identify warning signs that can be used now.

And we want our readers to know how to protect their money when the next stock market crash happens.

We'll show you how to do just that. Before we get to that, here's what we've learned causes a stock market crash and why you should be prepared now...

This Could Cause a Stock Market Crash in 2017

Speculation means traders are taking too many risks to buy stocks because they believe the market will only go up. Speculative investing can drive markets to all-time highs, but it also means stocks are priced far above their real value. And when the market corrects for this, the whole thing could crash.

Take the most famous stock market crash of all.

The 1929 stock market crash was brought on by nearly a decade of speculation.

During the 1920s, the stock market surged to unheard of highs. Investors even began to believe stocks could only go higher and that they were losing money by not investing.

This mentality led investors to take on irresponsible risks. Between 1923 and 1929, amateur investors borrowed over $120 billion (in today's dollars) to put into stocks.

And the logic made sense at the time. If the stock market was only going up, then there was little to no risk to buying stocks with borrowed money.

But the market highs were not sustainable. Stocks had sailed past their actual value as investors paid any price for them. And when stocks are soaring past their true value, a stock market bubble is inflating.

When the stock market began to correct in September 1929, investors panicked. Speculators couldn't afford any losses, so they sold their stocks immediately. This mass sell-off sent stock prices falling. Between September 1929 and June 1932, the Dow lost 86% of its value. An investor with $10,000 in the market in August 1929 had just $1,400 left by 1932.

This sort of catastrophic fall is the definition of a stock market crash.

We saw the same pattern more recently. The stock market crash of 2008 was caused by a bubble in the real estate market.

But the bubble eventually burst. Between 2007 and 2009, average home prices declined by a massive 30%. With house prices falling, many homeowners could no longer refinance their homes and were underwater on their loans.

And the housing collapse led to the 2008 stock market crash.

On Sept. 29, 2008, the Dow plunged 7%, the largest single-day drop in its history. Americans would lose $2 trillion in retirement savings by the end of the financial crisis.

Now we are seeing some of the same signs of speculation inflating stock prices, a sign a stock market crash is coming...

Are We in a Stock Market Bubble?

You see, the Fed cut rates because it wanted corporations to be able to borrow money cheaply. It reasoned that cheap money would let corporations spend on new projects and take more risks, which would grow the economy out of the recession.

Instead, U.S. corporations have been using the cheap money to buy back shares of their own stock. U.S. companies have borrowed $2.1 trillion since 2008, and they've bought back over $1.9 trillion of their own stock in the same period.

This trend of huge share buybacks has helped push stock prices higher than ever. But it's made stocks too high.

The Shiller PE ratio, a measure of stock market value, shows stocks are currently 73% above their historical average. That's higher than stocks were valued before the 2008 financial crisis...

Now the Fed is signaling more interest rate hikes are coming. At the December FOMC meeting, members of the Fed predicted there would be three rate hikes in 2017. And Janet Yellen has been vocal that rate hikes are on the way.

"It's our expectation that rate increases this year would be appropriate," Yellen told Congress on Tuesday (Feb. 14).

That means cheap money is coming to an end, and overinflated stock prices might be, too. That could lead to a stock market crash in 2017.

How to Protect Your Money When the Stock Market Crashes