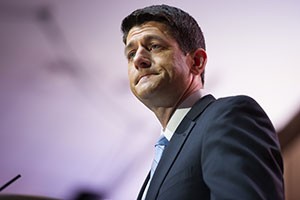 The Dow Jones news is the index sliding again today as concerns mount about the Trump administration's abilities to get tax reform and other economic priorities done. That sentiment has anti-Trump leaders smelling blood in the water. Later this week, left-wing hedge fund billionaire George Soros and other anti-Trump forces will meet for the annual Democracy Alliance conference.

On Tuesday, the Dow fell 237 points and had its single worst day of 2017. The CBOE Volatility Index – widely considered the market's fear gauge – surged more than 7%.

The Dow Jones futures projected a 41-point decline as investors showed new concerns that President Trump and Republicans will be unable to get his economic policies implemented this summer. The worries are mounting on fleeting expectations that Republicans have enough votes to pass healthcare reform this week, a defeat that would set the president's agenda back. The threat grew even higher after The Wall Street Journal reported that any corporate and income tax reform in 2017 could come later and deliver smaller results than investors have anticipated.

The U.S. dollar and the equity markets are under pressure, while Treasuries and gold prices are on the rise. Thursday's healthcare vote is seen as a proxy for future political wins. The markets expect that the administration will pass tax cuts, deregulate the financial and energy markets, and implement a $1 trillion infrastructure spending bill to bolster economic growth.

The rising inventory levels have created a wealth of uncertainty for energy traders who have been focusing so much attention on OPEC's efforts to cap excessive production. The global oil cartel has said that it plans to extend its six-month deal to help bolster prices. However, rising U.S. production has kept crude prices from rising above $60.00 per barrel and has instead dragged crude to a multi-month low. Money Morning Global Energy Strategist Dr. Kent Moors explains that crude prices are on a rollercoaster. When will we see change and greater stability?

But the big news is Ethereum price, which has rallied more than 250% in the last four weeks.

Markets are seeing a timely combination of rising institutional interest and a dire impasse among users of other cryptocurrencies like Bitcoin. We are seeing a lot of money shifting from Bitcoin investing to Ethereum investing in order to protect capital and profit.

So what is next? We dig deeper into the Ethereum and Bitcoin debate, right here…