The Ethereum price is up about 250% over the past four weeks thanks to a timely combination of rising institutional interest and a dire impasse among users of fellow cryptocurrency Bitcoin.

A month ago, the price of Ethereum was under $13. Now it's trading at about $45, according to the website CoinMarketCap.com.

Much of the surge in the Ethereum price has come from Bitcoin owners either bailing on Bitcoin or hedging their digital currency bet by purchasing some ether.

But not all. Ethereum has developed substantial "buzz" as a cryptocurrency with features distinct from those of Bitcoin. Over the past year, this upstart has attracted attention from such heavy hitters as Microsoft Corp. (Nasdaq: MSFT), JPMorgan Chase & Co. (NYSE: JPM), and CME Group Inc. (Nasdaq: CME).

Still, most of the vertical spike in the Ethereum price is the result of nervous capital moving from Bitcoin to Ethereum.

About half of the Ethereum trading volume is from Bitcoin/Ethereum trades, with the rest coming from Ethereum/fiat pairs. (Ethereum purchases in U.S. dollars make up about one-fifth of the trades.)

One highly publicized event that caused some of the movement occurred March 10, when the U.S. Securities and Exchange Commission (SEC) denied a rule change that would have allowed the Winklevoss Bitcoin Trust ETF to begin trading on the Bats BZX Exchange.

Anticipation that the SEC would approve the Winklevoss ETF had pushed the Bitcoin price as high as $1,327, an all-time high. The price of Bitcoin plunged about $300 in the immediate aftermath of the SEC denial.

But that's not the main reason Bitcoin capital has been moving into Ethereum in recent weeks.

A Bitcoin Crisis Is Driving Up the Ethereum Price

While the Bitcoin price has soared in recent months - despite a recent pullback, it's still up about 24% over the past three months - a crisis brewing for almost two years has finally come to a head.

The argument is over how to increase the capacity of the Bitcoin network to process transactions. Right now it is close to capacity, which has at times caused transactions to be delayed. Fees are rising as well because transactions that offer higher fees get priority.

Without getting into all the ugly details, this has become an extremely contentious civil war. 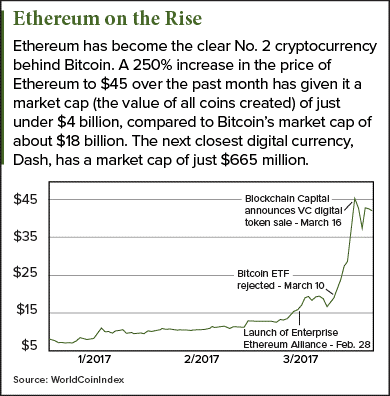 Advocates of a variant of the Bitcoin software called Bitcoin Unlimited -- the side that wants to increase the block sizes - have gained more support over the past few months, particularly from the powerful Bitcoin miners.

That has raised the specter of what's called a "hard fork" of Bitcoin, which essentially would split Bitcoin into two incompatible variants.

That's what has so many in the Bitcoin community concerned. After the split, it would be unclear which one is the "real" Bitcoin.

The resulting confusion would play very badly in the mainstream financial media, causing the Bitcoin price of both versions to plummet.

Such a disruptive event would also open the door for another cryptocurrency to steal some of Bitcoin's thunder. And Ethereum, the No. 2 cryptocurrency behind Bitcoin, is the most logical candidate.

Fear of a Bitcoin hard fork has driven the movement of capital from Bitcoin to Ethereum. Cryptocurrency exchanges like Bitfinex, Poloniex, and Kraken trade in both, making it easy for customers to buy Ethereum with their existing Bitcoin.

And Ethereum has become the go-to choice because of the "buzz" I mentioned earlier.

Here's why Ethereum is the new darling of the cryptocurrency world...

The Ethereum Price Would Be Rising Even Without Bitcoin's Woes

The only way I could purchase Eth was by buying Bitcoin with fiat and exchanging it, so I can't agree with 'most of the vertical spike in the Ethereum price is the result of nervous capital moving from Bitcoin to Ethereum.'

Ethereum can be purchased solely on its own via several online wallets, certainly the rise has a lot to do with the bitcoin debacle as people are looking at alternate crytocurrencies to trade and make money. Dash is another benefiting from bitcoin woes.

I agree with Harold's comment. I purchased all my ETH the same way, through BTC.