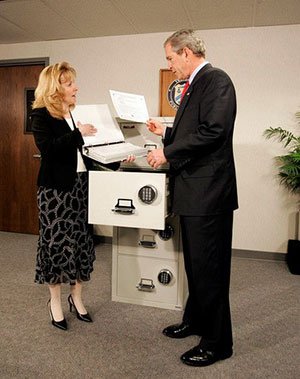 In 2010, the amount the Social Security program paid in benefits exceeded what it took in payroll taxes, a gap that now grows larger every year.

But this grace period will be short-lived. The Social Security trustees estimate that in 2020 the interest payments will no longer be able to cover the shortfall. At that point, the program will need to start redeeming its special obligation bonds.

Since that's debt owed by the Treasury, every bond redeemed will add to the federal budget deficit. It will be like paying off one credit card with another.

Of course, accelerating the growth of the national debt - already at $20 trillion - could affect the ability of the government to continue buying back the special obligation bonds.

As the baby boomers retire, the ratio of workers supporting retirees will continue to shrink. That means a gap in Social Security's finances that will widen with each passing year.

In just 17 years the trustees estimate the Social Security Trust Fund will run dry (taking the interest payments with it).

By law, the system can only pay out money it controls. The depletion of the Social Security Trust Fund in 2034 means that in that year - benefits will shrink to 77% of what is owed. So a retiree who gets a monthly check for $1,000 would see it fall to $770.

The political outcry would probably force Congress to supplement Social Security from the general budget to prevent such painful cuts in benefits.

But that solution will quickly balloon budget deficits and the national debt.

According to Social Security trustee projections, the annual supplement needed to make the program whole will reach $1 trillion by 2038 and $2 trillion by 2042. The 2017 federal budget is about $4 trillion.

Any way you look at it, the Social Security program - and the millions of Americans who rely upon it - have some rough years ahead of it.


Video
An $80 Billion Cover-Up? Under the watchful eye of Congress, the government will soon be implementing a controversial plan that threatens the retirement of millions of Americans. And they're using an obscure loophole buried in Title 29 of the U.S. Labor Code to do it. If you have a 401(k), IRA, or any type of retirement account, this could cause you to miss out on $68,870 or more. Learn more...