When it comes to groceries, Amazon.com Inc. (Nasdaq: AMZN) is just getting started. 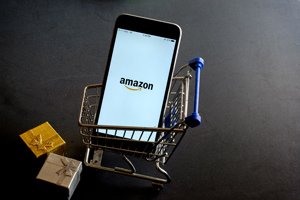 BigBasket, a five-year-old startup valued at $450 million, operates in about 25 cities across the country.

According to The Times of India, the Indian grocery firm and the American e-commerce leviathan have entered a 60-day exclusivity agreement. Over the next two months, BigBasket cannot hold talks with any other potential buyers about a sale. However, the retailer can still reach out to investors to raise more capital.

This isn't Amazon's first rodeo in the world's fastest-growing economy. In fact, the company has been involved in the Indian e-commerce space as far back as 2013, when AMZN offered only books and movies to consumers. Since then, AMZN has expanded and now offers a full range of products on its Indian marketplace. Now, Amazon is taking the next step.

This investment, if it goes through, will be a huge win for Amazon. Online grocers have only a 4% share in the grocery market, according to a report by Technopak Advisors, which means Amazon will be getting into the market at a time with limited competition.

And this is likely just the start...

Amazon plans to invest close to $500 million just in online food retailing in India, according to a June 13 report from Bloomberg. According to the same report, Amazon CEO Jeff Bezos has also vowed to spend $5 billion in India all together in an effort to compete against local rivals.

For investors, this presents a huge opportunity...

"Amazon will dominate every market it enters - a disruptive company like Amazon can turn an industry on its side," said Money Morning Chief Investment Strategist Keith Fitz-Gerald, who has long been bullish on Amazon, on April 10.

And given Amazon's aggressive moves as of late, it looks like the grocery industry - in both America and India - is next.

"It's Amazon versus everybody else, and any retailer without an Amazon defense strategy is living on borrowed time," said Keith.

"[For that price] you can either buy 100 shares or a really nice house in the competitive San Francisco Bay area," said Keith.

Amazon Is Opening Up Retail Stores, but Not for the Reason You May Think