But the even bigger news for the silver price last week may not be its latest weakness, but rather a flash crash on Thursday evening around 7:00 p.m.

Some are calling the event a "market glitch," but experts are blaming high-frequency trading by computer algorithms, whereby selling feeds on itself at lightning speed. And sadly, these events are becoming increasingly common.

You'll note this flash crash was significant, pulling silver down 8.7% very briefly from around $16.10 to $14.70. Although silver recovered quickly, it may have set the tone for Friday's session alongside the jobs report.

All of this begs the question of whether or not silver prices are at a bottom yet. Judging by certain technical indicators, we may be near a bottom now, and I think the metal will rally higher as demand from one of the world's biggest silver markets continues to explode.

Before I tell you more about my bullish silver price prediction, here's a recap of late last week's performance…

However, the biggest action didn't happen until around 7:00 p.m. on Thursday night, when silver experienced an 8.7% flash crash.

The red line in this chart shows the dramatic 8.7% decline… 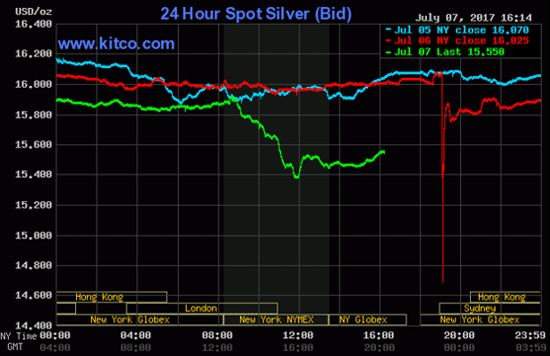 And on Friday, July 7, as the stock market rallied after the U.S. Department of Labor reported 222,000 jobs were added last month, precious metals suffered. Silver opened lower at $15.90 and sold off to $15.39 in morning trading.

The losses have continued this week as the silver price today (Monday, July 10) fell 1.3% to a 15-month low of $15.37 this morning. With that, it's clear investors are nervous about silver's long-term potential as they continue to engage in profit-taking.

But if we examine the silver market from technical and demand perspectives – the latter regarding the world's largest silver-importing nation – you can easily argue that prices are poised for a rebound.

In fact, I could see the price of silver rebounding 43.1% from its current level to $22, and these charts support my bold and bullish forecast…

Hi there,
I wouldn't like to be a "pundit" in any product these days!
There is no logic much less intelligence in what is being done lately. I say "done" because it cannot be due to real trade, merely manipulation on a gigantic scale – Soros style.
The nonsensical "Dutch Tulip" effect in the nonsensical Bitcoin game demonstrates just how insane the games have become.
SILVER? Even real Gold is stationary in the real world now and graphic comparisons point to its state in lockstep with the exploding (exploded?) "Tulip" game.
The world is probably due to end in July, anyway.