China's cooperation against North Korea just got one step further away.

When Beijing agreed to economic sanctions against the Hermit Kingdom last weekend, it appeared that China might be getting serious about working to disarm its dangerous neighbor. 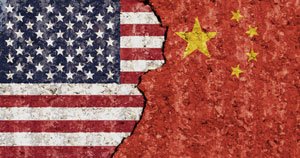 But yesterday (Aug. 10), one of China's main state-run media outlets, The Global Times, issued a grim editorial about how the country should respond to a U.S.-North Korea war.

The China-based editorial laid out two possible war scenarios, and neither one of them benefit the United States. In fact, the piece even laid out the conditions under which China would take military action against America.

Here's precisely what Beijing's media mouthpiece had to say...

The Global Times: Stand Down, or Beware China's "Firm Hand"

This statement was, in part, a cautionary message to Pyongyang over the regime's threat to fire missiles at the U.S. Pacific territory of Guam: Attack America and you're on your own, kid.

But it was also a jab at the United States because it inferred that the Red Dragon would not take America's side, either.

Worse yet, The Global Times also issued a more direct warning to America:

"If the U.S. and South Korea carry out strikes and try to overthrow the North Korean regime and change the political pattern of the Korean Peninsula, China will prevent them from doing so."

And just in case that warning was too subtle, the state-run publication put its stance even more bluntly:

"[Beijing] needs to make clear its stance to all sides and make them understand that when their actions jeopardize China's interests, China will respond with a firm hand."

Indeed, the Red Dragon has long wanted U.S. forces out of various nearby regions - South Korea and the South China Sea, in particular. Just yesterday, for example, China's Defense Ministry scolded a U.S. Navy destroyer for coming within 12 nautical miles of one of China's artificial islands in the South China Sea, according to Reuters. The Red Dragon even sent two warships to warn the U.S. ship to leave.

As The Global Times stated, the U.S. military's presence is a threat to the Chinese government's "interests": namely, control of the South China Sea and use of North Korea as a buffer against Western ideologies.

But the United States seems unlikely to relieve its pressure on North Korea or decrease its "freedom of navigation" operations in the South China Sea - especially given Trump's "fire and fury" outburst earlier this week.

Even without direct military conflict, the fact that China's state-run media is printing such anti-American rhetoric - coupled with China's aggressive naval action in Pacific waters - indicates that tensions in East Asia are far from over.

We're in this for the long haul.

That can be particularly troublesome for investors here in the states right now - many of whom might be tempted to make fear-based investing decisions as tensions mount. And as we've told you time and time again, when emotions drive your investment decisions, you could stand to lose a lot of money - and fast.

Fortunately, we've got a specific plan for readers worried about their future fiscal well-being...

Tom has more than 25 years of experience in the securities industry, and he's witnessed market panic myriad times before.

"Making significant (read: expensive) investing and trading decisions based on emotion and news cycles is one of the fastest, most surefire ways I know of to lose money," he explained to readers on Aug. 10.

At the same time, however, the U.S.-North Korea conflict does make for a great "Trading 101" lesson...

"Now, in spite of heated exchanges between U.S. President Donald Trump and the North Koreans, the fact of the matter is that people in the U.S. government and military are doing everything possible to de-escalate and protect," Tom wrote. "That means defense companies are going to be seeing a continued increase in their sales and revenue."

Indeed. Several defense stocks Tom likes are trading at or near their 52-week highs...

And there's a way to invest in all of them at once...

Tom explains why he likes this ETF, as well as offers advice on where investors can reliably park their money to both hedge against volatility and profit in the months to come, right here.