The Dow Jones Industrial Average is rising ahead of trading this morning, but all eyes will be on Federal Reserve Chair Janet Yellen as she speaks at the Fed's annual Jackson Hole summit today...

Dow futures are up 39 points this morning, and we don't expect the Fed will slow stocks down today. But investors will want to know how the Fed plans to unwind its $4.5 trillion balance sheet or if there will be another interest rate hike this year... 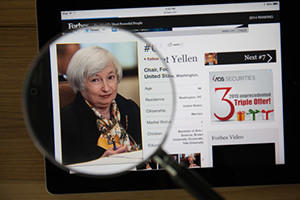