The mainstream media still gets befuddled by a Bitcoin price crash, despite having covered the topic for more than four years.

September's Bitcoin crash was yet another failed chance to get it right. 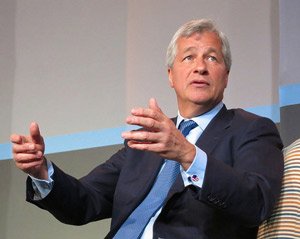 News out of China and some particularly disparaging comments from JPMorgan Chase & Co. (NYSE: JPM) CEO Jamie Dimon have been the catalysts behind this Bitcoin price crash.

Seeking to rein in what it viewed as dangerous speculation, Chinese regulators, led by the People's Bank of China, declared initial coin offerings (ICOs) illegal on Sept. 4. Then word came on Sept. 11 that China would be shutting down all the Bitcoin exchanges operating in the country.

In the middle of all this, Dimon dumped on Bitcoin at a Sept. 12 banking industry conference.

"Bitcoin will eventually blow up. It's a fraud. It's worse than tulip bulbs and won't end well," Dimon said.

Bad news for Bitcoin to be sure, but too many media stories and commentaries interpreted these events in a way that suggested Bitcoin's very existence was threatened.

These are but a few examples of what's been going on…

How the Media Misread the Bitcoin Price Crash

On the CNBC website, veteran analyst Ron Insana published an article with the headline, "Bitcoin Is in a Bubble, and Here's How It's Going to Crash."

Citing Dimon's comments, Insana agrees that Bitcoin is a bubble that will "end badly," akin to the Dutch "Tulip Mania" of the 1630s. I debunked this myth two years ago, but every drop in the price of Bitcoin revives the faulty Tulip Mania comparisons.

Think about it. How many popped bubbles reinflate time and time again? And then move to a new all-time high?

The Bitcoin "bubble" has burst four times this year alone – and several times before that (2014 being the most dramatic episode).

If Bitcoin is a bubble, we need to redefine the term.

Life-Changing Profits: This investing strategy has racked up 34 triple-digit wins so far this year – and 50 in the last 12 months. To learn how to get in position for the next one, click here now…

Let's move on to Forbes, which ran two pieces based on the events in China.

A commentary by Jason Bloomberg titled "Collateral Damage from the Inevitable Bitcoin Crash" also makes a lot of false assumptions.

It's based on the idea that China's actions were "the first few dominos to fall, heralding a complete collapse of the Bitcoin speculative bubble."

So certain is Bloomberg of this premise that he declines to explain why this collapse is inevitable, declaring instead: "That fact is too obvious to warrant such an argument." (He spends the rest of the piece detailing the ramifications of a Bitcoin collapse.)

Another Forbes commentary by Panos Mourdoukoutas, "Why China Crushed Bitcoin," claims that China's crackdown "questions the very legitimacy of Bitcoin, and its prospects for gaining broad acceptance as medium of exchange, an asset, and a means of different payments."

Mourdoukoutas adds, "the buzz for the digital currencies is gone."

A Pattern of Hostility Toward Cryptocurrencies Exposed

MarketWatch has been especially hostile to Bitcoin lately. Brett Arends wrote a piece on Sept. 7 titled "Bitcoin, Ether and Other Cryptocurrencies May Be Seeing the Beginning of the End."

Arends sees the events in China as a preview of a global government crackdown on cryptocurrencies like Bitcoin, rendering them "unconvertible into anything useful."

A week later, MarketWatch ran a story with the headline, "Dimon Calls Bitcoin 'a Fraud' and May Have Delivered the Biggest Blow to the Digital Currency." 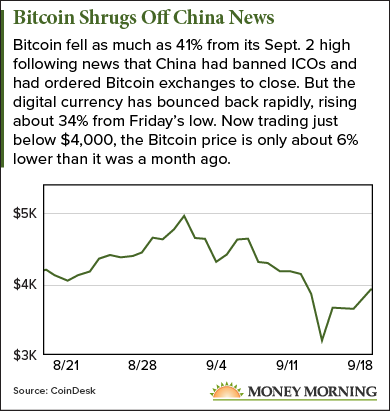 This one is notable for making the ridiculous claim that Dimon's comments were "the biggest blow" to Bitcoin. Not the Mt. Gox debacle in 2014? Not Warren Buffett's remarks that same year to "stay away" from Bitcoin because it's a "mirage"? Not any of the hacks of Bitcoin exchanges? Not even the recent news from China?

The best part of all this is that the so-called "Bitcoin price crash" didn't even last two weeks. The price of Bitcoin began to reverse Friday, climbing 34% to just over $4,000 yesterday (Monday).

If the mainstream media had bothered to research Bitcoin's history, they'd have expected this. It's why Bitcoin veterans don't get rattled during these events.

But the media also failed to explain what was really going on in China and why it never posed a serious threat to Bitcoin.

Why China Has No Intention of Killing Bitcoin

May i continue with banks which were fined for corruption

Let Jamie Dimon cry like a baby and China crack down as new currencies are created and flee their corruption.