Out of the 1,358 surveyed, an overwhelming 45% chose "uncertainty at the federal level" as their biggest concern. Coming in second was the fear of "Big Marijuana taking over," and the third most popular gripe was the threat of "high taxes" on products.

Just look at this chart… 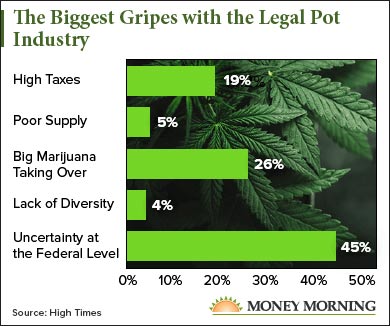 Here's what you need to know: None of these "gripes" are worth stressing over.

In fact, we're not worried about any of these factors derailing the burgeoning marijuana industry.

Here's why – plus, a look at what could be the most profitable opportunity of 2018…

High Taxes Are the Reason States Are Legalizing

Legal marijuana taxes are high – there's no question about it.

But these taxes are the primary reason states are incentivized to legalize in the first place. In fact, "The discovered revenue from regulated legal cannabis markets can be a lifesaver to local law enforcement, substance abuse counseling, and other social services," said legal cannabis consultant Leslie Bocskor to Forbes on April 11.

For example, Colorado put $16 million toward Affordable Housing Grants and Loans in 2016 from cannabis tax collections.

Extra cash for things like infrastructure projects and schools is just a glimpse at what legal marijuana tax revenue could do for state economies.

Marijuana legalization is even being touted as a solution for states suffering from pension crises, like Kentucky.

"There is an economic factor to this," said Daniel Seum, Jr., a cannabis activist from Kentucky, on Oct. 11. "When you free up that market, there will be taxes, and those taxes are used for pensions." Seum, Jr., estimates legal marijuana would generate about $110 million in tax revenue per year for his state. For comparison, the state of Colorado pulled in roughly $200 million in 2016.

"There are so many factors involved… you have health factors – these people need it. And you also have an economic factor, it's a win-win," said Seum, Jr.

And as more states legalize, the federal government's authority over marijuana will quickly disappear…

The Federal Government Has Its Hands Tied

No matter what U.S. Attorney General Jeff Sessions may claim, the federal government's crackdown on legal marijuana is never coming to fruition.

Legal marijuana is already well on its way to becoming the "norm" in America. Eight states – Alaska, California, Colorado, Maine, Maryland, Massachusetts, Oregon, and Washington – and the District of Columbia have fully legalized possession of small amounts of marijuana for adults' recreational use. An additional 13 states have decriminalized it. And 29 states, along with Puerto Rico and Guam, now allow the use of medical marijuana.

Make no mistake: State legalization can (and will) ultimately end up forcing the government to reclassify the drug into a less restrictive tier (currently, marijuana is a Schedule I drug, along with heroin).

We've already started to see the wheels turning this year, with…

"The bottom line is, Jeff Sessions looks like he's just about out of options (or, more to the point, out of money) if he wants to use the full weight of the Justice Department to crack down and interfere with legal marijuana right now," said Money Morning Director of Technology & Venture Capital Research – and pot stock expert – Michael A. Robinson on May 9.

And if marijuana is reclassified, it could open up the industry to import-export and help increase the potential for a nationwide, regulated market.

In other words, it could advance marijuana into the mainstream economy.

Big Marijuana Is a Great Investment

Marijuana isn't just for tiny, independent dispensaries and growers anymore – and that's not a bad thing.

"Big Marijuana" companies have proven to be extremely lucrative for investors looking to profit from the marijuana industry boom – especially now that many state governments are growing dependent on the industry to support themselves.

And this is only the beginning.

Even after stacking up a bunch of double-, triple-, and even quadruple-digit gains over the last year and a quarter, many of our Roadmap to Marijuana Millions pot stocks still have plenty of gas left.

Take Aurora Cannabis Inc. (OTCMKTS: ACBFF), for example. No doubt a "Big Marijuana" company in Canada, its market cap is about $2.85 billion Canadian, or $2.1 billion U.S.

Aurora has been a staple in Michael's model pot stock portfolio for years. Since Aurora first entered The Roadmap to Marijuana Millions' model portfolio on Sept. 2, 2016, its shares are up 581%.

And on Nov. 14, Aurora announced that it had plans to acquire CanniMed Therapeutics Inc. (OTCMKTS: CMMDF) for $3 billion. Investors – many of our readers among them – celebrated the deal because the combined companies, with a market cap of around $3 billion, would likely become the largest pure-play pot stock on the market.

Aurora shares skyrocketed 15% on the news and are likely to head higher. "I think Aurora's shares will keep rising as it acquires more small cannabis companies and becomes the No. 1 or No. 2 player in Canada," said Michael on Nov. 29.

While the Canadian market is about to experience a growth surge, we're most excited about what's happening right now with California's upcoming legalization.

Indeed, California's marijuana legalization could be the biggest profit opportunity of our lifetime.

You don't want to miss this…

Breaking: Marijuana Legislation Sparks the Most Profitable Opportunity of 2018

$20.2 billion… that's the amount of money expected to pour into California's cannabis market following its upcoming legalization of recreational marijuana.

Forget Nevada, Washington, or Colorado – even the marijuana industry in the entire country of Canada is about to be dwarfed by the impending California legalization.

In this crucial interview with pot stock expert Michael Robinson, you can learn the ins and outs of California's marijuana markets and get details on three tiny pot stocks expected to hand you the biggest gains.

Those that are worried about taxes on pot should consider the fact that legalization of booze helped build empires and brought down the cost. With illegal pot sales the risk is the reason most people can garner higher prices.
Having come from the era of hippies and flower children myself, I am glad to see that government is finally realizing that they can regulate and tax thereby reducing the need for jail cells for minor infractions of the law.