It's very possible, even likely, that Bitcoin price rigging has played a major role in dragging down the price of the cryptocurrency some 70% over the past six months. 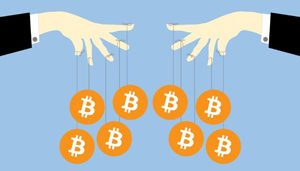 Fortunately, you don't have to be a victim to market manipulation...

What started last year as allegations on Twitter and Reddit have this year become academic papers by respected scholars and criminal investigations by the U.S. Department of Justice (DoJ).

He cited "significant volatility" in the days surrounding the expiration dates of Bitcoin futures contracts on both the Chicago Mercantile Exchange (CME) and Chicago Board Options Exchange (CBOE). Both launched Bitcoin futures trading in December, just as the Bitcoin price was climbing to its all-time high.

Lee's analysis showed an 18% decline in the Bitcoin price in the 10 days leading up to an expiration date and recoveries by the sixth day following that date.

Lee outlined a scenario in which a futures trader long Bitcoin and short the futures would sell actual Bitcoin holdings just before the expiration date. The drop in the Bitcoin price would ensure "a handsome profit" on the short position.

But Lee isn't the only market observer that suspects monkey business in the Bitcoin markets...

The CFTC Smells Bitcoin Price Rigging and Isn't Happy About It

On Dec. 1, just a week before CBOE started Bitcoin futures trading (CME followed a week later), the CFTC made its expectations clear.

"We expect that the futures exchanges, through information sharing agreements, will be monitoring the trading activity on the relevant cash platforms for potential impacts on the futures contracts' price discovery process," CFTC Chair J. Christopher Giancarlo said in an official statement. "This includes potential market manipulation and market dislocations due to flash rallies and crashes and trading outages."

Both futures exchanges rely on Bitcoin exchanges - the "cash platforms" the CFTC referenced -- to help set futures contract prices. That's why the CFTC wants them to monitor the activity on the exchanges they use.

CBOE uses the Winklevoss twins' Gemini exchange, which has gone to great lengths to comply with all regulatory requirements.

By May, mounting concerns over suspected manipulation and a lack of market transparency prompted the DoJ, in cooperation with the CFTC, to launch a criminal investigation.

The focus of the probe is on tactics known as "spoofing" and "wash trading."

Spoofing is when a trader sends a large number of buy or sell orders to move the price in the intended direction but cancels before the orders execute. Wash trades involve a trader buying and selling to themselves to create an illusion of market demand with the goal of luring in other traders.

And the mechanism behind at least some of the manipulation could be a cryptocurrency called Tether...

The Tether Controversy May Be Part of the Rigging Puzzle

This month a professor at the University of Texas, John Griffin, published a 66-page paper linking the trading of the cryptocurrency Tether on the Bitfinex exchange with major increases in the price of Bitcoin.

Griffin has a decade-long history of ferreting out financial fraud. He's published papers on fraud by credit agencies, mortgage fraud by banks, and, last year, on manipulation of the CBOE Volatility Index.

Bitfinex also happens to issue Tether, a "stablecoin" intended to maintain a value of $1. Bitfinex claims to hold U.S. dollars to back up all $2.7 billion worth of the cryptocurrency. But last year questions were raised over whether Bitfinex has sufficient U.S. dollars on hand. The company has never definitively answered those questions.

But the Tether/Bitfinex suspicions are just one possible avenue for the Department of Justice probe. It's likely investigators will be looking into activities at multiple exchanges.

Regardless of what happens with the investigation, crypto investors need to be prepared for the possibility that bad actors have been manipulating Bitcoin prices.

How to Deal with Bitcoin Price Manipulation