So far fourth quarter earnings have made a mockery of things.

Of the 20 S&P 500 companies that have provided Q4 guidance so far, 18 of them have guided lower, "slashing" their forecasts, according to Goldman Sachs and CNBC (as of Monday afternoon).

What's more, roughly one quarter of the reported earnings have come in flat to middling. According to Capital IQ, overall revenues are up only slightly at 0.34%.

Under the circumstances this suggests two things to me:

First, let's tackle the volatility that's still in store; then we'll move on to what you can do to prepare for it.

So far this earnings season, roughly one quarter of the S&P 500 has already reported. That leaves the market with nearly 375 companies that have yet to spit out their numbers, roughly 150 alone this week.

Assuming the balance follows the pattern set so far, companies like Caterpillar Inc. (NYSE: CAT), Philip Morris International (NYSE: PM), and 3M Co. (NYSE: MMM) are going to show "respectable" (under the circumstances) numbers while talking about the "challenges" they see ahead.

Meanwhile, a few others, like DuPont (NYSE: DD) and United Technologies (NYSE: UTX), are going to reflect weakening earnings and revenue pressures leading to further cost-cutting as a means of protecting profits. These will include job cuts.

I also expect the bulk of the remaining companies will take the opportunity to lower their expectations — especially when you consider that 61% of the companies as of Monday afternoon missed revenue expectations.

The irony here is that 61% of the companies that have reported over the same period have also exceeded analysts' expectations.

Naturally the markets will punish those who missed even when what they should recognize is that the analysts were wrong yet again. But that's another story for another time.

What's important to understand is that top-tier company management is using this earnings season to accomplish three things.

First, they're telegraphing real worries from the C-suite. Despite what the Fed wants us to believe, executives remain cautious and uncertain. So they are hoarding cash, hiring only when necessary and trimming things to the bone.

Second, they're lowering the expectations bar to the point where any hint of prowess in the future will likely induce an earnings "surprise" and engender additional support for their share prices.

Three, they hope investors will respond to both situations favorably and they're banking on Fed policy as the primer. There's no question the Fed has run out of bullets given the near-complete lack of response in the markets to QE infinity. And with the fiscal cliff approaching, they'd like to appear protective rather than aggressive, figuring it's the easier position to defend.

Now let's talk about the downside.

If you look at a chart below of the S&P 500, the range-bound conditions we've seen since this crisis began are evident. So are the much broader ranges since 2000, which is really where this mess started from a technical standpoint.

Put that against Professor Robert Shiller's work, and you can see the Fed is clearly trying to engineer a rally even when the natural proclivity is to guide lower to the norms established since the end of WWII. 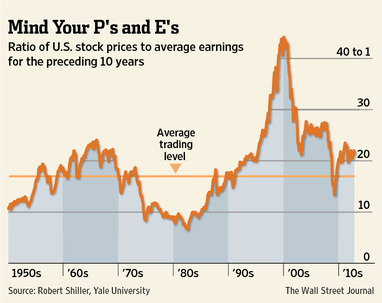 This isn't a surprise. Or, at least it shouldn't be.

As my good friend Barry Ritholtz, CEO of Fusion IQ, recently pointed out so eloquently in his blog, The Big Picture, the "Fed's liquidity fire hose has forced managers into equities beyond what is normally prudent."

And that brings me to what you can do about all of this brewing volatility…prudently…and ahead of time:

And as always, remember that buy-and-hold is a marketing gimmick, not an investment strategy.