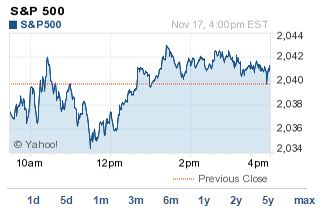 The S&P 500 eked out a 1.5-point gain Monday to hit yet another record high as a fresh round of mergers and acquisitions fueled optimism in the markets.

What Moved the Markets Today: Markets reacted this morning to news Japan has slipped into recession. The world's third-largest economy saw its GDP slip by an annualized 1.7% in the third quarter, its second straight quarterly downturn.

Now check out the other top stories from the stock market today: