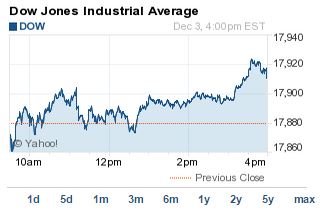 The Dow Jones added 33 points Wednesday, fueled by strong showings in the energy sector and expectations of more stimulus action in the European bloc. Both the S&P 500 and Dow Jones hit new records, continuing their surge toward the end of 2014.

What Moved the Markets Today: With energy assets undervalued, buyers dipped their toes back into the well, searching for profits and buoying the sector. The U.S. economy received a jolt of confidence after the services sector showed stronger than expected growth in November. Investors are also keeping a keen eye on the meeting of the European Central Bank tomorrow. Financial ministers across Europe are more likely to consider a large-scale bond-purchasing program to stimulate growth after a rash of bad economic reports across the bloc. The U.S. dollar continues to soar, with the USD Currency Index just below 90.