The Dow Jones today yo-yoed up and down, falling triple digits before rallying late in the afternoon to end just above even for the day. Concerns about global growth and falling energy prices offset hopes of pending stimulus action by the European Central Bank and gains in the technology sector.

Shares of Johnson & Johnson (NYSE: JNJ) were the largest drag on both the Dow and S&P 500, slipping 2.6% after the company reported weaker than expected earnings. 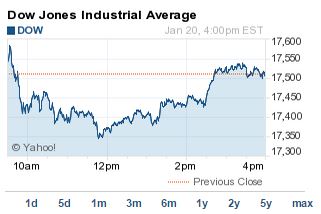 What Moved the Markets Today: Investors soured on the markets after the International Monetary Fund slashed its growth forecasts over the next two years, calling for global growth at 3.5% in 2015 and 3.7% in 2016. West Texas Intermediate oil prices slipped more than 4.7% today, while Brent crude oil prices were down more than 1.3%.

However, the markets seemed upbeat about potential for stimulus action by the European Central Bank (ECB). The ECB is likely to announce a massive bond-purchasing program Thursday to inject life into the world's largest economic bloc.