The Dow Jones shed 60 points on Friday after Standard & Poor's downgraded Greece's long-term sovereign debt rating. The news offset early gains fueled by U.S. jobs and wage growth. January was the 11th consecutive month with job gains above 200,000. Despite Friday's downturn, the DJIA gained 3.84% for the week, its best weekly run since January 2013.

What to Watch Today: With a light economic calendar today, investors will focus on the worrisome game of chicken transpiring in Europe. 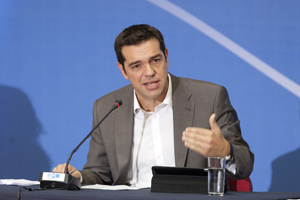 With Greece facing a downgrade late on Friday afternoon, the ripples - which our Chief Investment Strategist Keith Fitz-Gerald explained last week - may not be done for the U.S. market just yet. Greece's Prime Minister Alexis Tsipras plans to undo the several austerity measures that were part of his country's international bailout conditions. He'll move forward despite an application deadline pending for Greece to extend its debt obligations and the downgrade on Friday.

Money Morning Tip of the Day: "Transformational companies" held for many years can be the best investments of your lifetime.

Money Morning Executive Editor Bill Patalon recently discussed "transformational companies" in his Private Briefing research service. He defined them as firms so revolutionary, they change the way business in their sector is done. They even change buyer behavior.

When investors get a piece of one of these companies and have the patience to hold it for many years, the profit potential can be greater than any other investment they've made before...

Wal-Mart changed the way America shops. It shifted the power base in retailing from product suppliers to the retailer itself.

Timing - when these firms emerge - is a crucial factor. And Wal-Mart reached its own "critical mass" just as the U.S. middle class emerged.

Let's look at what would have happened if you'd invested in Wal-Mart in its early days.

So you see, spotting and investing in one of these revolutionary firms early on can lead to massive long-term returns. And we're here to help you spot those next Wal-Marts.

Patalon revealed another "transformational company" that investors can get in on today, and at a discount - go here to find out what it is...