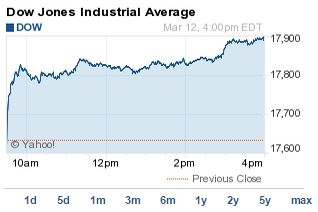 The DJIA today surged 259 points, gaining back most of Tuesday's losses. Nine of the S&P 500's 10 indices were on the rise this afternoon, with the energy sector the lone decliner.

As noted, retail sales fell sharply in February, with the government blaming wintry weather for the decline. According to the U.S. Department of Commerce, sales declined 0.6%, well below the expected 0.4% increase forecasted by economists. On a positive note, weekly jobless claims dropped from last week, slipping by 36,000 to a seasonally adjusted level of 289,000.

Wall Street wants you believe a return to "normal rates" via a hike of any kind will lead to a massive market correction.

But the historical precedent is much more nuanced. In fact, the most recent examples point to the opposite happening – rate hikes causing rallies in their aftermath.

That means panic selling – like what happened Tuesday when the Dow Jones fell 333 points – is an opportunity to buy.

Keith Fitz-Gerald is a seasoned market analyst and professional trader with more than 30 years of experience. For more investing tips and stock picks from Fitz-Gerald, go here…