For April 1, 2015, here's how the stock market did today, the top stock market news, and stocks to watch based on today's market moves… 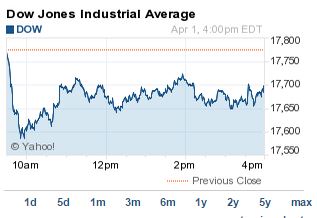 Wal-Mart Stores Inc. (NYSE: WMT) was the biggest decliner on the S&P 500, while the Nasdaq was weighed down by a sell-off in biotech. The iShares NASDAQ Biotechnology Index ETF (Nasdaq: IBB) slipped almost 1%. (Editor's Note: To find out why there's no biotech bubble, just money to be made, go here…)

Every day we give investors a "tip of the day" to find their best profits. Here's today's tip:

Don't listen to pundits warning of a biotech bubble.

Biotech stocks have been soaring. The Nasdaq Biotechnology Index has climbed 46% in the last year, compared to only 10% for the S&P 500.

But after the biotech index shed 7% from March 20 through 26, many Wall Street pundits started crying "bubble."

These tremors could signify a correction in the coming months – but the "bubble" is not about to burst on biotech stocks.

In fact, the Nasdaq Biotech Index hasn't even reached a market correction yet. That's defined as a 10% drop from a market's high. A bear market is reached after a 20% dip.

Now, let's compare that to a "bubble" bursting. When that happens, there's a cataclysmic crash in the market.

Take the 1992 biotech crash for instance. From the end of November 1992 through the beginning of March 1993, the Nasdaq Biotech Index tanked more than 55%.

"The correction we're seeing now seems to happen every year at about this time, like clockwork," Tremblay said. "As the sector races upward, everyone begins to wonder how long the momentum can last. After a while, they get queasy from the altitude, and their risk tolerance erodes. Time to take profits. So share prices begin to tumble."

With the recent pullback, now is a great time for investors to add to their positions in strong biotech stocks.

"My investment strategy is always the same in this situation: follow the Bollinger bands," Tremblay said. "When a company you own looks oversold – when its moving average touches the bottom band twice in a short period of time – buy more shares."

Ernie Tremblay understands the FDA approval process and the market demand emerging drugs better than almost anyone else. Get more biotech investing insight and stock picks from Tremblay here.