For  May 6, 2015, here's how the stock market did today, earnings reports, the top stock market news, and stocks to watch based on today's market moves... 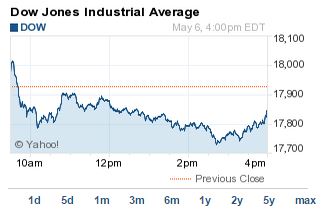 Why the Market Is Down Today: Stocks slumped this morning after Federal Reserve Chairwoman Janet Yellen said there are "dangers" in current U.S. stock valuations.

"I would highlight that equity market valuations at this point generally are quite high," Yellen said. "There are potential dangers there." The report erased pre-market momentum and raised new concerns about the markets at a time when economic data suggests the U.S. economy contracted in the first quarter after years of Fed-induced stimulus and loose monetary policy.