For May 8, 2015, here’s how the stock market did today, earnings reports, the top stock market news, and stocks to watch based on today’s market moves… 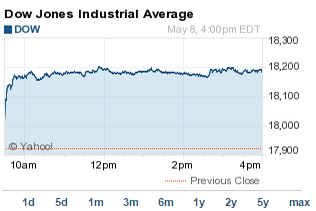 Why the Market Is Up Today: The DJIA Index surged 267 points as a strong April jobs report suggests the U.S. economy is gaining steam. The news could press the U.S. Federal Reserve to provide a clearer timeline for when it will raise interest rates.