For May 21, 2015, here's how the stock market did today, earnings reports, the top stock market news, and stocks to watch based on today's market moves... 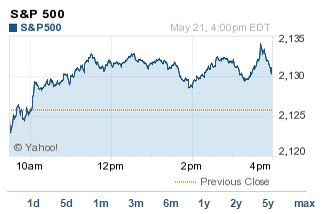 The S&P 500 hit yet another record today thanks to earnings reports and expectations that the Federal Reserve will not raise interest rates until next year. The DJIA Index ticked upward marginally. The S&P 500 Volatility Index (VIX), the market's fear gauge, roughly 6% on the day.

On Friday, Federal Reserve Chairwoman Janet Yellen will give a speech on the outlook of the U.S. economy from Providence, R.I., at 1 p.m. today. Investors will keep an ear on her speech, looking for clues on the Fed's interest rate plan following the release of the FOMC minutes on Wednesday.