For June 17, 2015, here's how the Dow Jones Industrial Average did today, the top stock market news, and stocks to watch based on today's market moves…

How Did the Dow Jones Industrial Average, S&P 500, Nasdaq Do Today? 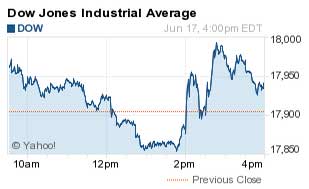 The DJIA today ticked up 31 points after U.S. Federal Reserve Chairwoman Janet Yellen's statement following the conclusion of the June Federal Open Market Committee meeting on monetary policy. Yellen said the Fed is on track to raise interest rates for the first time in almost 10 years. Yellen suggested that top Fed officials expect the benchmark rate to rise to 0.625% by the end of the year.

This would suggest two possible hikes this year, despite news the central bank has slashed its GDP forecast to 1.8% to 2%, down from its previous estimate of 2.3% to 2.7%. The central bank said it expects more economic growth and more job creation in the coming months.

One word of caution on Yellen's optimism: Shares of shipping giant FedEx Corp. (NYSE: FDX) fell 3% today on news that the company reported a quarterly net loss. The stock is considered a bellwether of broader economic strength, as strong shipping levels suggest robust activity in both the retail and transportation sectors.