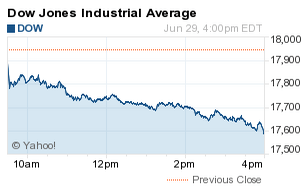 The DJIA today cratered 350 points as traders sold on fears that Greece may default on its debts.

The nation shocked European Union ministers over the weekend by announcing no intentions to pay debts due on Tuesday and plans to allow its citizens to vote on a referendum over whether the country should accept the EU's debt conditions.

Banks across Greece will be closed for the week and the nation's central bank has imposed capital controls to prevent runs. Shares of National Bank of Greece (NYSE ADR: NBG) fell more than 24% on the day.

Today, all three major U.S. indexes fell more than 1% for the first time since May 26. The S&P 500 slumped more than 2%, while the Nasdaq fell 2.4%. Monday's decline pulls the Dow Jones into negative territory for the year.