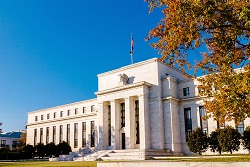 Futures for the Dow Jones Industrial Average today (Monday, Sept. 14) forecast a 24-point decline as investors look toward this week's critical FOMC meeting. This week, the U.S. central bank will decide whether it will raise interest rates for the first time since 2006, a decision that isn't being taken lightly by investors.

On Friday, the Dow added another 102 points, while the S&P 500 completed its largest weekly gain since July. The S&P 500 was fueled by Gilead Sciences Inc. (Nasdaq: GILD), which added nearly 2% today on news the company completed its $10 billion debt offering. Traders are speculating the biotech giant is poised to make a big acquisition in the coming weeks. Meanwhile, shares of Shake Shack Inc. (NYSE: SHAK) gained more than 13% after receiving a series of upgrades.