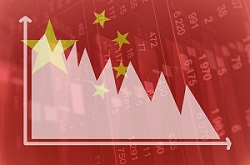 Futures for the Dow Jones Industrial Average for today (Monday) forecast a 73-point gain although the 2016 China stock market crash continued. Stocks on the Shanghai Composite Index fell another 5.2% this morning in heavy trading volume. The China Securities Journal reported that Li Wei, president of the State Council's Development Research Centre, believes that annual growth of 6.5% from 2016 to 2020 will be very difficult for the nation moving forward.

On Friday, the Dow slumped 167 points, ending the worst first week of trading since 1928. For last week, the S&P 500 fell 6%, while the tech-heavy Nasdaq slipped 7.3%. The U.S. Labor Department reported the American economy added 292,000 jobs in December. The U.S. unemployment report remained unchanged at 5%.